You may not realize it, but the government's war on cash has already begun. 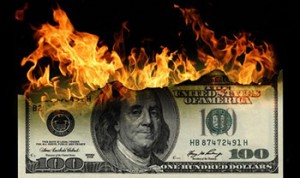 And it's happening not just in the United States, but all over the world. In fact, many countries are well ahead of the U.S. in the war on cash.

Several European countries have ceilings on cash transactions – and they keep lowering them.

Don’t Miss: How to Make a Killing… When Everyone Else Is Panicking

The United States has no cash ceiling restrictions (yet), but trying to withdraw as little as $2,000 from your own bank account will put you under government suspicion.

According to the Bank Secrecy Act, banks must file a Suspicious Activity Report for large transactions because it's often a signal of criminal activity, such as money laundering, tax evasion, or identity theft.

Money Morning Capital Wave Strategist Shah Gilani recently had an unpleasant brush with the Bank Secrecy Act himself. A teller refused to cash his check for several thousand dollars unless he "filled out a form."

An Early Glimpse of the Government's War on Cash

Gilani said this is an early warning of the U.S. government's war on cash – capital controls.

It would be easy – and a mistake – to dismiss the war on cash. After all, don't most of us get our paychecks direct deposited into our bank accounts? And don't we pay most of our bills and purchases with credit cards, debit cards, and other forms of electronic payment?

We do, but that only makes the government's war on cash that much easier.

The real issue is why governments want the death of cash.

Seems to me, living in a supposedly "FREE" country, my freedoms are slowly being taken away. Paranoia knows no bounds with this government. Least little activity and they get nervous!

IS there any avenue by which the ordinary consumer can inquire whether a CTR(s) has been filed against them? If "Yes" – how?

According to what I read on the FinCEN website, and its CT Reporting form 140, the amount must STILL be in-excess of US$10,000. However, some of the examples provided state the 'aggregate' amount ($10,000) must be transacted within the same 'business-day' while one example mentions the $10,000 transacted over 2 contiguous days STILL triggers the reporting requirement and the statute I located mentions NO time-span which COULD leave on open to a CTR over ANY time-span – from $10,000 transacted in 1 day to the same amount aggregated over a life-span!

WHERE in the US Code (title, section, ss) does the REAL & LEGAL statute document the 'time-span' in-which such transactions must occur to qualify for reporting?

I live in Canada and the trial balloon on negative interest rates was just floated here on Monday by the Governor of the Bank of Canada (read Feds), but I don't think the average person on the street has a clue what this really means . The Governor has been selling it under the banner of "we expect the best going forward but if the economy really tanks we have some options "and it has worked in places like Switzerland etc " . As your article points out the outcome could be dire and indeed we could conceivably be PAYING the banks to hold our money which we are almost doing now anyhow, given current rates being paid .

What people should know, is that corporate merchants are all too eager to profile sales per individuals. When you go at the cash register after you bought some items, the cashier registers you with your home address, your phone number, and mostly, your name. With electronic cash cards, all your buying habits will be filed up in order to profile your spending habits. This help to know how much demand there is to set the offer. The more the demand, the higher the offer. From there, merchants will know how much items are sold, in what volume and in what store it is more redeemable. At the same time, what you buy indicates your intentions; if you're out to buy 45 bags of fertilizer, you're bound to draw attention. It will come to that point where yes, cash legal tender paper money will disappear all together, mainly because of the underground economy that the governments can't perceive taxes on.