The GoPro stock price climbed nearly 12% on Thursday, and that has many investors bullish on the future for GoPro Inc. (Nasdaq: GPRO) stock.

But we don't see the GoPro stock price rally continuing into 2016...

The GoPro stock price got a boost when rumors swirled that Apple Inc. (Nasdaq: AAPL) might buy the struggling wearable camera maker. The gossip came after FBR & Co. analyst Dan Ives said in an investor note that buying GoPro would make sense for Apple. 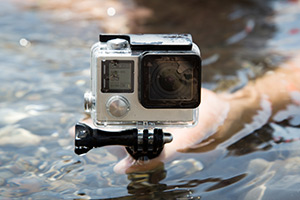 Such talks have been around for months but until yesterday, they had no positive impact on the sinking GoPro stock price.

While the acquisition rumors have some investors bullish, the rumors are really all that GoPro has going for it right now. You see, the picture for the GoPro stock price looks ugly as we head into 2016...

The company's July launch of its ice-cube-sized camera has disappointed. Dubbed the Hero4 Session, the camera was GoPro's attempt at an entirely new design from its traditional action-camera models.

GroPro trimmed the Hero4 price by 25% in late September. Earlier this month, the company slashed the price again. The Hero4 now sells at half of its debut price of $400. While that could boost sales, it will also eat into the company's gross margins.

The Hero4 was expected to be a hot seller this holiday season, but projections for the Hero4 have since cooled.

In October, GoPro forecast that revenue would decline 17% year over year in Q4. That's a stark turnaround for the company, which had averaged quarterly growth of 47% over the previous eight quarters.

And that's not the only problem on the horizon for the GoPro stock price...