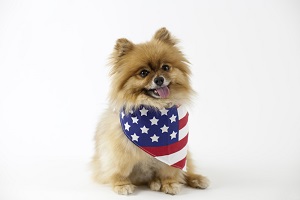 GOP presidential hopeful Carly Fiorina played with puppies and chowed down on a Milk-Bone in a new video released by The Independent Journal earlier today.

"I always used to eat Milk-Bones as a kid," Fiorina reminisced just before taking a bite out of the dog treat. "I thought they were very good."

The former Hewlett Packard Enterprise Co. (NYSE: HPE) CEO quickly spat it back out and shared it with a dog.

While it's humorous in its entirety, one particularly funny moment in the two-minute Carly Fiorina video featured the Republican telling a pack of roaming pups that she could use them for "debate prep." She then named them: "You could be Donald Trump," she told a terrier mix. "And you can be Chris Christie," she proclaimed to a Chow. "And you can be John Kasich," Fiorina declared, petting a young German Shepherd.

The IJ posted the clip as part of a series depicting politicians in humorous or self-deprecating situations. Fiorina played along quite well…

"A dog is sad when you're gone," she lamented.

"A dog is happy to see you!" she exclaimed.

Fiorina made a point midway through the video that President Barack Obama once ate a different sort of dog food when he was a child. "You know, [he] ate one of your cousins," she tells a pair of pups. "Vote Republican."