For those wondering how many oil jobs were lost in 2015, Forbes reported on Oct. 22 the number had surpassed 200,000 worldwide. 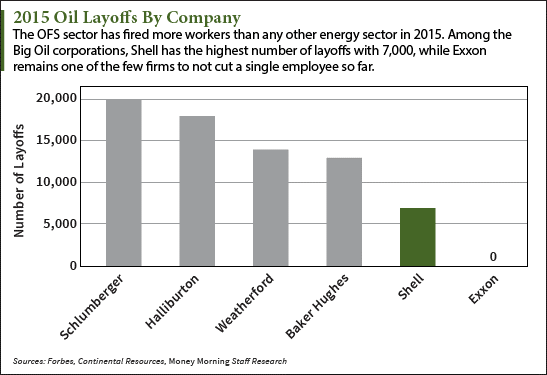 How Many Oil Jobs Were Lost in 2015? Ask the OFS Companies

OFS companies are tasked with actually setting up the oil wells. While many office and high-skilled employees have been laid off, it's mostly the workers laboring in the fields who are at risk.

"The closer your job is to the actual oil well, the more in jeopardy you are of losing that job," said Tim Cook, president of PathFinder Staffing in Houston, to The Wall Street Journal. "Each time an oil rig gets shut down, all the jobs at the work site are gone. They disappear."

Schlumberger – the world's largest OFS company – laid off the most employees this year with more than 20,000 job cuts. It laid off roughly 15% of its employees and announced it will cut more jobs next year "in light of expected reduced activity for 2016 and to streamline its support structure," according to a U.S. Securities and Exchange Commission filing earlier this month.

The reasons why so many oil jobs were lost in 2015 are explained in the Q3 earnings reports. Halliburton's $5.6 billion in third-quarter revenue was down 6% from the year-ago quarter. That was mostly due to the 53% crash in oil prices since October 2014.

"Companies are reacting aggressively to shorten the duration of the downturn," Steve Morse, a consultant with employment agency Russell Reynolds Associates, told Forbes. "These cuts are as dramatic as we've seen in this industry ever."

Oil jobs will continue to be cut as crude oil prices hover in the $30 range. But according to Money Morning Global Energy Strategist Dr. Kent Moors, prices will see double-digit gains by the summer of 2016…

If you think shareholders in the energy sector are likely to let things go that way for long, you're dead wrong. At a certain given point, the Board of Trustees will intervien, because shareholders will demand recovery of lost benefits, and from there, a lot of C.E.O.s will be sent packing if they don't meet the demands. From there, prices for crude will soar back up to heights never seen before. I was the one predicting to Denis Larocque on TVA network that gas prices would go up to $ 1.50 a liter in the greater Montreal district, but everybody thought I was nuts. Richard Green's book really thought me a thing or two…