The drop in China's stock market was attributed to a renewed slide in oil prices, and mounting concerns about capital outflows ignited a late-session sell-off and sparked investor panic.

The crashing Chinese stock market has had a major impact stateside, with the Dow Jones Industrial average falling 7.5% to open 2016. That's why we're talking with Money Morning experts about what a China stock market crash means for your money.

But first, this is what caused another China stock market crash today...

By falling 6.4% today, the Shanghai Composite Index posted its lowest close since December 2014. 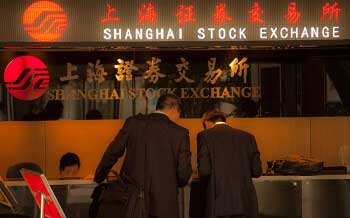 It also marked the index's largest one-day percentage loss since Chinese regulators did away with circuit breaker mechanisms on Jan. 8. The system, put in place at 2016's start, was aimed at calming jittery markets and reducing volatility. Instead, the circuit breakers were blamed for bursts of sudden selling.

China's panic selling Tuesday followed data showing capital outflows surged last month. Outflows jumped nearly $50 billion month over month in December, with the estimated 2015 total reaching a record $1 trillion. That is more than seven times higher than all of 2014, according to Bloomberg data dating back to 2006.

"The inability to control capital outflows is the typical sign of crisis in emerging markets," Nathan Griffiths, a senior emerging-market equities manager at NN Investment Partners in The Hague, told Bloomberg. "Given the importance of China to both emerging markets and the global economy, a China crisis would be pretty horrible."

Here's what today's Chinese stock market crash means for the global markets and your money...

The Impact of the China Stock Market Crash

European markets were in the red in afternoon trading. However, U.S. markets were higher Tuesday on solid earnings reports and strong housing data. The Dow Jones Industrial Average was up more than 200 points in morning trading.

Still, markets around the world will remain volatile. Concerns about low oil prices, rising interest rates from the U.S. Federal Reserve, and the slowdown in China could all contribute to the markets falling further.

According to Money Morning Global Credit Strategist Michael Lewitt, there were several factors over the last two years that have created this downward pressure on the markets...

These drops and the likelihood of more selling pressure have many investors panicked. That's why we developed a complete 2016 bear market investing guide so you can protect you money, and even profit, when the markets are falling...