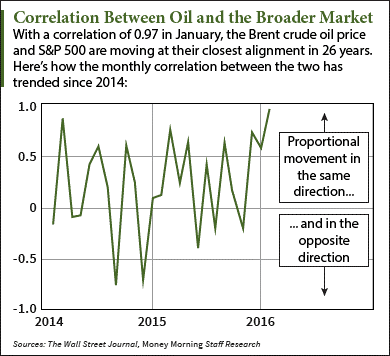 Oil prices haven't been this tied to stock performance in nearly three decades.

The connection between oil prices and stock prices is usually tighter during recessions. It topped out above 0.8 during the peak of the financial crisis in 2008.

Most analysts blame the correlation on investor fear of a U.S. market collapse.

"Currently, big swings in oil prices may be forcing some investors to sell stocks simply because they measure risk in their portfolios by looking at volatility across a range of assets," The Wall Street Journal reported earlier this week.

Energy commodities have certainly been one of the most volatile asset classes of 2016 so far. WTI oil prices are down 13% this year and currently trade at a 12-year low of $34 a barrel. Natural gas prices have fallen 7.6% since Dec. 31. Meanwhile, the S&P 500 is down 5.6% over the same period.

While much of the sell-off in both commodities and stock prices certainly stems from fear of a domestic market crash, there's one foreign factor that's having an even greater impact than oil on investors' sentiment toward stocks.

Here's the biggest reason why crude oil and the stock market are in lockstep right now...

The strong link between oil prices and the stock market is a direct result of China's ongoing meltdown.

The Shanghai Composite Index - the bellwether index for China's economy - has crashed 22.6% over the first 20 trading sessions of 2016. It currently sits at its lowest level since November 2014. Meanwhile, the Hong Kong-based Hang Seng Index has fallen 10.2% to its lowest level in more than three years.

As the second-largest oil consumer in the world, China's struggling economy is rattling investors. The problem became clear in November when oil imports fell by 218,000 barrels per day to a 20-month low. Overall demand that month hit 732,000 barrels per day - down 9.9% from the same month in 2014.

But China's role as the world's second-largest economy is what's sending the broader U.S. market lower. The country's massive growth and appetite for raw materials around the world has an incredible influence on the global economy. After the Shanghai Composite fell from its peak last June, markets around the world have experienced a domino effect of sell-offs.

"Right now it is the fear of a Chinese slowdown that is spooking the market," said Barnabas Gan, commodity analyst at the Singapore-based investment bank OCBC, to MarketWatch. "Most of the selling is based on emotions and panic."

The Bottom Line: With both oil prices and the stock market already down significantly, investors want to know why the two are so tightly correlated this year. While many experts believe the connection comes from fear in U.S. markets, the correlation actually stems from fears of further Chinese volatility. The country's role as the world's second-largest economy and second-largest consumer of oil has spurred a sell-off in both the oil market and stock market.

China Just Made the Gutsiest Move of the Entire Financial Crisis: By scrapping its one-child rule, China's created a massive investment opportunity. This policy reversal will drive an historic shift in production and consumption that will double the size of China's economy by 2035. The time to act is now. Here's how to align your money for maximum profit...