China's grave dancers have taken great pleasure in convincing millions of investors that the nation will never succeed based on any number of erroneous arguments...

...not worthy of world leadership

Underneath it all, this was little more than thinly veiled contempt for Beijing's 35-year-old "one child" policy. Called yousheng, the law has averted an estimated 400 million births over the years in the name of modernization and efficient resource consumption.

Now that law's been scrapped, and couples will be allowed to have two children.

The White House and much of the mainstream media wasted no time posturing after the announcement. Press Secretary Josh Earnest, for example, noted that the policy is a "positive step," but that "we also look forward to the day when birth limits are abandoned altogether." Amnesty International said bluntly that the policy change was "not enough."

They're missing the point.

China's policy reversal is the gutsiest move yet in the ongoing global financial crisis. It's a game changer of the highest magnitude. Moreover, it's great news for savvy investors.

Today we're going to talk about why and, of course, how to align your money for maximum profits.

We've talked a lot about China over the years together and, at this point, you should be well-versed in the logic propelling that nation onto the world's stage. But what we haven't spent a lot of time talking about is what's driving things behind the scenes.

Today, we're going to change that with a look at something called the "Window of Opportunity."

The Window of Opportunity is a little-understood data point that actually drives several of our Unstoppable Trends, including Demographics, Medicine, and Human Augmentation.

If you've never heard the term before, the "window" refers to the composition of a country's working age population. While there are some variations, generally that's people between the ages of 15 and 65. (Remember these numbers, by the way, because we're going to come back to them in a few minutes.)

The reason why is pretty straight forward.

People live longer. Children and the elderly produce less, yet consume more. The cost of urbanization rises, as does systemic government spending even as per capita output falls to cope with rising dependency on everything from social services to private resources. 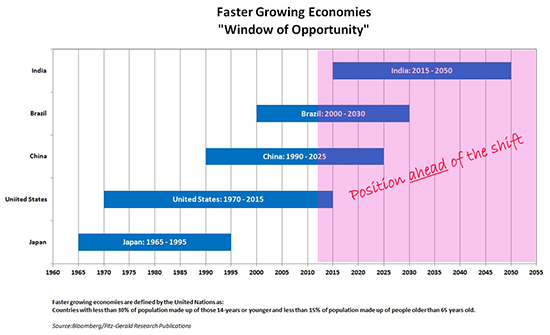 I realize that this can be hard to comprehend, so let me put this another way.

Which means, by implication, now's the time to act if you really want to make your fortune.

YOU MIGHT LIKE TO WATCH THIS YOUTUBE VIDEO BEFORE YOU PRESUME FULL EMPLOYMENT FOR BABY BOOMERS AS IT SEEMS MORE LIKELY THAT THERE WILL JUST BE MORE YOUNG PEOPLE IN THE DOLE QUEUE. WHOLE FACTORIES IN CHINA ARE RUNNING WITH FEWER THAN FOUR EMPLOYEES

I agree, Chinese stocks ( like Alibaba) are for safekeeping, not trading, as a very long position. My only concern is the valuations in U.S. Markets might not hold up so well in between. P/E's for U.S. listed companies are historically pretty high right now. Might pay to wait if you want to get better prices. P/E ratios always matter in the long term, as does valuations.

Robotics will come to China in due time, as it did in Detroit in the 1980's to improve profitability. They had to and so will the Chinese, in due time as their factories develop and modernize. Remember Henry Ford? At first, his Ford Model T's and factories employed a great many workers at good wages. Everybody was working. Then came the 1970's and they were not. Japan was working.

How about buying these ETF's when their momentum picks up a bit, but still exhibit relatively low valuations? Seems this is a factor, in addition to risk management.

The other side of the coin is that China population increase will create a Chinese invasion the size of a Tsunami. Not talking about CO2 production. And they will take over the World and impose their rules. The views of Earnest and Amnesty are irresponsibile.