Data from the Institute for Supply Management showed U.S. service-sector growth slowed more than forecast in January. And Wednesday's read was the lowest for the sector since February 2014. 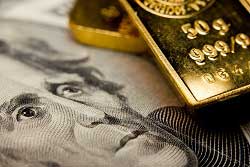 "So many of these [bank stocks] are falling so sharply," Raoul Pal, formerly of Goldman Sachs and founder of the Global Macro Investor, told CNBC Tuesday. "I think people haven't even caught up with what is going on, and that really concerns me. I look at the big long-term share charts of them, and I think this looks very terrifying indeed. I have not seen anything like this for a long time."

A third catalyst for gold prices today was uninspiring news out of China.

China set its economic growth projection range at 6.5% to 7% this year. That's the slowest rate in 25 years. And efforts to curb overcapacity are expected to raise unemployment in some provinces. Keeping unemployment low is a top policy priority for China's stability-fixated government.

Xu Shaoshi, chairman of China's National Development and Reform Commission, said in a Wednesday news briefing that downward pressure on the world's second-largest economy would persist in 2016.

All three of those factors caused the price of gold to climb Wednesday, and according to Money Morning Resource Investing Specialist Peter Krauth, gold prices will only continue climbing in 2016…

Consumption in China, which competes with India as the world's biggest gold consumer, rose 3.7% to 985.9 metric tons in 2015 from 2014. That's according to data released Wednesday from the China Gold Association, which represents jewelers, refiners, banks, brokerages, and miners.

Swiss exports of gold to Hong Kong and the mainland surged 87% in December from the prior month.

Demand was strong in all areas. But gold coin buying, a key representation of bargain hunters and jittery individual investors, lead the way.

RBC Capital Markets said earlier this week that demand in Asia, which accounts for more than 60% of global gold use, is fundamentally strong and should continue.

Gold Prices Will Continue Climbing in 2016

Money Morning Resource Investing Specialist Peter Krauth said Monday that from most angles, "gold's been looking strong and appears poised to continue that trend over the next several months."

Krauth says to watch gold flow into physically backed exchange-traded funds (ETFs), which have been strong year to date. That's a good indicator that gold prices will keep climbing.

And of course, the U.S. Federal Reserve's interest rate tightening pace will have a significant impact on gold prices.

Except for China and Mexico, virtually all of the world's major countries are in recession, led by either a contraction in manufacturing or by the turmoil in commodities. Japan on Friday joined central banks in the Eurozone, Switzerland, and Denmark in adopting negative interest rates.

Those are all reasons why gold prices will continue to climb in 2016, and why gold is becoming an increasingly strong investment.