Investors wondering why Chesapeake Energy stock is falling today need only look at the company's recent past. 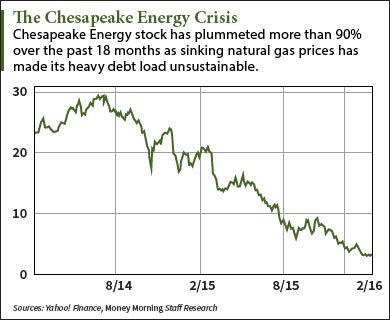 The immediate cause of today's 50% plunge in Chesapeake Energy Corp. (NYSE: CHK) stock this morning (Monday) was the news that the company had hired the restructuring law firm Kirkland & Ellis LLP. Chesapeake is carrying a debt load of $9.8 billion - eight times the company's market value.

The news broke before markets opened, sending the Chesapeake Energy stock price down 22% in pre-market trading.

The company issued a statement late in the morning in an attempt to stop the bleeding. Chesapeake Energy said that "Kirkland & Ellis LLP has served as one of Chesapeake's counsel since 2010" and that it "currently has no plans to pursue bankruptcy."

That helped the CHK stock price to recover about half of the day's losses, but it was still down more than 30% at noon.

Chesapeake's heavy debt load has weighed on the stock for more than a year and is eating the company alive...

Why Chesapeake Energy Stock (NYSE: CHK) Has Been Hit So Hard

As the second-largest natural gas producer in the United States, Chesapeake Energy has been hit hard by slumping natural gas prices. Natural gas fell by more than a third last year and is down about 50% from mid-2014 levels.

That has choked off Chesapeake's cash flow and crippled its ability to pay its debts. The downward spiral has forced Chesapeake Energy to lay off 15% of its workers and suspend its dividend.

As its debt matures, Chesapeake doesn't have the cash to pay it off. Analysts estimate the company will come up short by about $1 billion over the next two years.

And while Chesapeake Energy says it's not pursuing bankruptcy, its debt headaches make it a very high-risk company nonetheless.

Needless to say, investors should steer clear of this train wreck. At this point, it's even too late to take advantage of the sell-off by shorting CHK stock.

The Bottom Line: A report that Chesapeake Energy had enlisted a restructuring firm sent CHK stock tumbling. But while the company denied it was pursuing bankruptcy, its massive debt and weak cash flow have put it in a very precarious position. This is one for investors to watch from the sidelines.

A Winning Energy Stock: The slump in oil and natural gas prices has slammed almost every stock in that sector. Layoffs, earnings losses, and steep declines in stock prices have become the norm. But one kind of oil company has actually been able to benefit from crude's free fall. In fact, this company is making a killing right now...