The most basic principle of making money is not losing it.

If there's no way around that – then don't lose more than you make.

Now this may sound easy to do… but it isn't.

You put your money on the table, and the market takes it, having no intention of ever giving it back.

How to utilize a "stop." 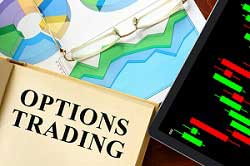 Next week, on Feb. 26, the New York Stock Exchange (NYSE) will no longer accept stop orders and good-til-canceled (GTC) orders. A stop order is an order where the price is set above the underlying asset's (the stock's) current value (called a buy-stop order) or below its current value (called a sell-stop order). A GTC order is an order that stays open until it's filled or canceled by the trader.

A stop order is designed to limit the loss on a trade, while a GTC order allows you to wait and see if the trade is moving in your favor, allowing you to move on your position without a time restriction.

But we're going to talk about the one reason they shouldn't worry at all – and it's called options.

The beauty of trading options is that it offers a way to profit off of stock moves without having to shell out lofty amounts of cash to buy the stock itself.

Let's take a look at why…

Say you decide to buy 100 shares of a stock at $190 instead of buying one contract on a $190 call option that expires in one month. After buying the shares, the stock loses 80 points and drops down to $110 – giving you a loss in value of 47%. Now this may be an unrealized loss, but it's a loss nonetheless.

To make matters worse… let's say that the money you had to buy that stock was everything you had in your account. You're not only left down 47% on your trade… you've also just lost 47% of your entire account.

Now I want to stress that I am NOT an advocate of spending all you have on one trade. Even spending 50% to 60% of your account size on one trade is too much. But I've seen too many traders do this, which is why I want to talk about it.

In this case, you bet virtually all of the money in your account on one trade and lost half of it as a result.

But had you bought that call option, you would've only risked 9%. Even if you lost 100% of the premium, you would've risked only 9% of the full stock price down to zero.

And if you think that stocks don't go all the way down to zero… then tell that to anyone who invested in Lehman Brothers, as just one example.

The bottom line is…

Buying an option inherently creates a built-in stop protection for your portfolio because of the reduced risk potential that exists in the old buy-and-hold strategy.

Look at LinkedIn Corp. (NYSE: LNKD), which has suffered a substantial drop… 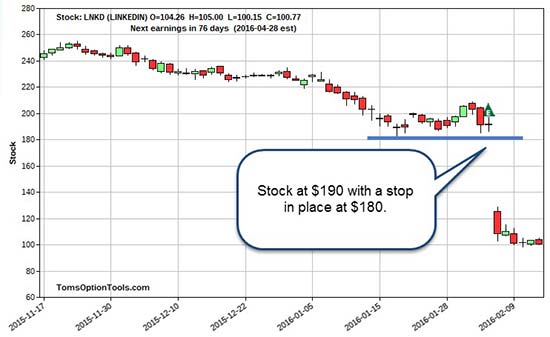 Looking at this chart, I'm not too sure that investors are feeling great and saying "hey, at least it's not trading at zero."

But let's say you chose to go long the stock, adding a stop-loss order to sell the stock at the current market price once it hits or goes through the stop.

The stop-limit order (an order to buy or sell stock at or above a certain price) would hurt you a bit more because it only would have stopped you if the stock hit that $170 price per share. If it gapped – as it did – then the stop limit at $170 would still be in place. This means that you would still own LNKD when it's trading at just $105.

And your loss potential?

The less experienced and ill-informed trader will spend money to buy the stock, using the stop order as "protection." However, the percentage loss of that stop may be a greater percentage loss to the portfolio than buying an option – even if the option loses 100%. This is because a 100% loss on the option may only result in a 2% to 3% loss of the overall portfolio.

And what's more is that the unrealized loss on the stock could be upwards of 40% to 60% of the portfolio if you're not careful and risk that much to begin with.

Now you can reduce your risk even more buy creating a loophole trade, like the bull call spread below:

Now what you'll want to avoid doing is spending as much money to buy a quantity of option contracts as you would on the stock itself.

But when you compare buying stock to buying options, you'll see that the option is your stop-order protection.

Why These Shares Are the Best for Trading Today: Traders are wizards at turning volatility into profits, but conventional tactics don't always work in this whipsaw market. In fact, there's a way to bank big gains on shares most people won't even touch right now – and it all comes down to one number…