As I told you last week, the U.S. Federal Reserve is already planning to unleash an economic "nuclear option" on the U.S. markets… a negative-interest-rate policy (NIRP).

The negative reception NIRP is getting from a lot of economists, analysts, and ordinary Americans doesn't diminish the likelihood the Fed will resort to this disastrous policy if it sees an emergency on the horizon.

It doesn't matter that the Fed's ZIRP (zero-interest-rate policy) and quantitative easing (QE) experiments inflated the stock market, undermined economic growth as corporations used ZIRP to buy back shares instead of investing in plants, equipment, and labor, juiced-up banks' balance sheets so they could pay dividends to pump up their shares, and forced other central banks to follow its insane policies.

That's what the Keynesian Frankenstein that we call the Fed does to create emergencies.

And, as sure as the next emergency's coming, so are negative interest rates.

But don't believe for a second NIRP's going to save us. It's not. It's going to hurt – a lot.

There are only a few ways to protect yourself from the NIRP monster, so listen up…

The Next Crisis Will Trigger NIRP 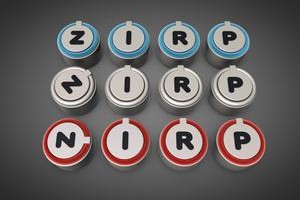 First of all, there is an emergency coming. We know that because the Fed and other central bankers keep engineering them then trying to fix them by hosing deflated asset bubbles with more easy money fuel to leverage them back up again.

The next emergency might be triggered by a cascade of energy company defaults, a major oil company collapse, regime change in a "friendly" oil-producing country if an anti-Western radical group assumes power, the insolvency of a mega bank, a debt payment moratorium or a default by a sovereign borrower, the Chinese economy crashing, any major stock market around the world spiraling out of control, or uncontrollable currency devaluations.

There's no shortage of potential emergencies.

Any emergency the Fed sees as a threat to the United States will trigger their knee-jerk reaction to lower interest rates, only they'll have to take them into negative territory this time.

The Big Banks Will Be the First to Suffer

That's not going to be good for the big banks – or any banks for that matter.

We know that because European banks, who have been dealing with negative rates since last year, have been pounded hard. On average, big Euro-centric banks are down 30%, with some down as much as 60%.

There's even talk of a possible "Lehman moment" resulting from a mega bank like Deutsche Bank AG (NYSE: DB) imploding.

The reality of NIRP is banks can't pass along their cost of negative rates to customers.

Trying to raise rates on loans to offset the cost of being charged to park excess reserves in central banks is a nonstarter.

And worse, if depositors are going to be charged to park their money in banks, or fear they'd be denied access to their cash residing in banks, they'll pull their deposits and create all kinds of havoc for banks.

If you own any banks, you might want to hedge your positions if you haven't already and are suffering because of their hard fall so far in 2016.

I've got my newsletter subscribers short the Financial Select Sector SPDR ETF (NYSE Arca: XLF), and we'll be adding to our bank shorts on any further market rallies.

The Safest Bets Against NIRP

As far as where to place some bets if NIRP looks like it's heading to our shores, I like Treasuries and gold.

If we're hit by any major emergency, there'll be a "flight to quality," which means a rush into U.S. Treasuries.

Before the Fed can pull the NIRP trigger, get into Treasuries immediately in the event of any emergency.

One way we play the Treasury market in my newsletters is by buying iShares 20+ Year Treasury Bond ETF (NYSE Arca: TLT). My paid subscribers just booked a nice gain there when we caught the last market panic and the flight to Treasuries it caused.

Once you're in Treasuries, if the Fed NIRPs us, Treasury prices will rise as their yields go in the opposite direction. So getting into something like TLT, if your timing's right, can be a very lucrative move.

Personally, I'm not a big fan of gold. It doesn't pay me a dividend. It has been too hard to make any money on for too long now, especially relative to all the other moneymaking opportunities the market's been giving us lately.

Gold will be one of the few asset classes (I view gold as its own asset class) that Americans would be comfortable holding if they didn't want to just hide cash in their mattresses.

If you see an emergency unfolding, I recommend grabbing some gold. There are a number of ways you can do this, from buying physical gold to investing in miners, but for my money, SPDR Gold Trust (NYSE Arca: GLD) is the best vehicle for gold.

It's the largest physically backed gold exchange-traded fund (ETF) in the world, and it's a cost-efficient and secure way for investors to access the gold market through a security traded on a stock market. Most importantly, it could see a nice move higher if after an emergency the Fed lowers the boom and NIRPs us.

Don't get me wrong – I'm not saying we shouldn't have some levers to pull and some fire extinguishers handy in the event of an emergency.

That should be the job of the president, his administration, and Congress' fiscal actions.

But this president, too many past presidents, and the spineless money-grabbers in Congress long ago punted all fiscal responsibility and all economic policy responsibility to the big-bank owned and operated Federal Reserve System.

And in an emergency, we know what that Frankenstein's going to do.

Four Charts That Have Wall Street Terrified: You don't need a crystal ball to know where stocks are headed. Sometimes markets give clear signals about what they're doing – and where they're going. And these four charts give us a solid clue about their future direction…

ENERGY MLP'S: CANARY IN THE COAL MINE ??

Look how much your mid-stream pipeline companies and energy MLP,s have crashed in the last year or so. I remember Keith Fitz-gerald heralding them as pretty much immune to the economy because oil and gas still must be transported in any case. He stressed their revenue stability because of only being a "toll road" not a driller.

Problem is, they had leveraged-up along with the drillers and needed constant income from new shares or cheap credit to keep up the appearances ( and more importantly, keep paying the high dividends popular with retail shareholders). When the cheap money disappeared, down revenue went down and dividends were cut. Shares collapsed.

I also remember Warren Buffet's famous analogy: " You find out what swimmers are really wearing when the tide goes out" Tide went out and sure enough, too many swimmers were discovered to be incidentally swimming naked. Extra high returns in a zero rate environment invariably have hidden risks. No free lunches. More to come too.

I'm with you all the expectations, but I don't want to wait until the AX falls balras please i want stop and sending me my money or securities to get money.