Before we get to why we're so bullish, here's what has driven the Tesla stock price higher in March. 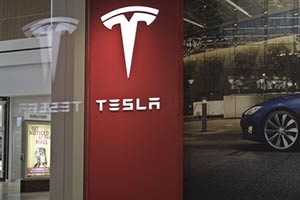 Tesla Motors Inc. (Nasdaq: TSLA) shares have been trending higher along with the 9% recovery in markets since February lows. Momentum stocks like Tesla suffered during this year's global stock market rout.

But that's not the only reason for the TSLA stock price rally...

Dougherty was impressed with the vehicle's handling and said demand is not going to be a problem. An upbeat Dougherty has a $355 price target for the TSLA stock price.

Then Car Magazine wrote Tuesday that thanks to its futuristic looks, latest in-car technology, and fantastic features, Tesla's all-electric Model X "is quite possibly the most revolutionary SUV yet."

The Model X is the newest addition to Tesla's fleet, and follows up on the Model S sedan.

Key features include: "bird in flight" doors; an expansive curved windscreen with UV-protected glass that ensures the cabin doesn't overheat or get too cold; plenty of leg and cargo room; and an extraordinary infotainment system. The car boasts collision prevention systems and automatic emergency braking, active even at motorway speed.

Tesla touts the $80,000 Model X as the "safest, fastest, and most capable sport utility vehicle in history." It has all-wheel drive and a 90 kWh battery providing 257 miles of range.

And while the reviews of the Model X have sent the TSLA stock price higher this week, there's an even bigger reason why we remain bullish on Tesla stock.

You see, the company is about to begin tapping into a $488 billion market...

TSLA Stock Price Will Soar Following Entrance into This Market

In late March, Tesla will unveil a new Model 3, but we still don't know a lot about the much-hyped car.

"The first pictures of the Model 3 will be at the end of March," CEO Elon Musk said. "I am being a little coy here, we are not gonna show everything about the Model 3 until a lot closer to production time."

Model 3 production is due to start in 2017. That means an unrestricted look at the Tesla Model 3 is still far off. But with a price tag of just $35,000, interest is expected to be high.

And with worldwide revenue from electric vehicles forecast to bring in $488.54 billion by 2030, Tesla stock needs an affordable vehicle to appeal to the masses.

Still, with the kind of volatility Tesla and global markets have experienced this year, TSLA stock is not for short-term investors. But for long-term investors looking to buy and hold a stock for five to 10 years, TSLA is an excellent choice.