Many of my readers have written to say they made a killing trading Valeant Pharmaceuticals International Inc. (NYSE: VRX) since I told you the stock was "Everything That's Wrong with the Markets" (Oct. 15, 2015). That trade has certainly gone our way, as VRX crashed from $168.87 to close at $61.31 on Friday. Those VRX March 18, 2016, $50 puts have traded as high as $6.10 since my recommendation. The options will expire March 18. If you haven't already, this week may be a good time to take profits or exit the trade.

But if you were on the wrong side of that trade, you're in a world of hurt right now.

Valeant's problems are legion: the company is currently under (at least) two separate U.S. Securities and Exchange Commission investigations, and on Feb. 29, Moody's Investors Service placed the company's $31 billion of rated debt on review for downgrade. While investors wait for all of these shoes to drop, the company announced on Feb. 28 that it would postpone its fourth-quarter results and conference call with investors (until March 15) and withdraw its financial guidance for 2016. Valeant stock finished the month of February by dropping another 18.41% ($14.85 per share) to $65.80 per share.

Yet some hedge funds bought more stock over the past few weeks. They refuse to throw in the towel despite the fact that the company today bears little resemblance to the one in which they originally invested. VRX's business model is no longer viable. It can no longer borrow cheaply to buy other drug companies. It can no longer raise drug prices by egregious amounts to line its pockets at the expense of patients. 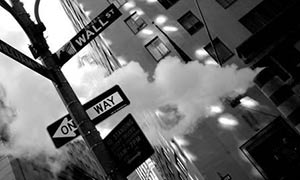 But some investors stubbornly cling to the belief that the company's problems will be solved. Some hedge funds have (or had until the stock collapsed) as much as 20% to 30% of their capital in the company, which is extraordinarily reckless.

The question now is whether it is too late for investors in the hedge funds that own this disaster to submit their redemption notices for March or whether they will have to wait for June to cut their losses (which were entirely foreseeable had the people managing their money been doing their jobs).

Here's how these investors got tricked…

Valeant is typical of the type of company that hedge funds, activist investors, and others feted in the financial press tend to flock to like flies on feces. The company's financial statements are filled with non-GAAP adjustments that flatter earnings and paint an unduly positive picture of the company's prospects. Built on a foundation of cheap debt (that is no longer available) and excessive drug price hikes (which are now politically untenable), VRX is a study in how to fool some of the allegedly smart people all of the time.

Beyond its huge debt load and price gouging of consumers, there is another problem at Valeant that suggests more trouble lies ahead for the market. Like many companies in today's stock market, the company's financial statements do not paint an accurate picture because they are filled with phony "non-GAAP" adjustments that make earnings look better than they really are.

If you want to know how investment disasters like Valeant Pharmaceuticals occur, the type of phony financial reporting described below is a good place to start looking (failing to disclose its corrupt relationship with mail-order pharmacy Philidor Rx Services didn't hurt either).

It is one of the marvels of modern markets how they seem to depend on the deliberate suspension of disbelief to stay afloat. The collective intellectual capital of the "buy side" (which should be called the "dark side") blithely ignores the fact that reported earnings are as genuine as the promises of political candidates.

While half the trick of investing is figuring out what the consensus thinks, the wisdom of crowds is a myth when it comes to the markets.

The differences between earnings calculated according to generally accepted accounting principles (GAAP) and the "pro forma" earnings that companies foist on an all-too-willing-to-believe investor class are obscenely large.

Back here on Planet Earth, where cash flow is all that stands between companies and bankruptcy court, S&P 500 GAAP earnings fell by 12.7% in 2015, according to S&P Dow Jones Indices. Naturally, S&P 500 companies reported "pro forma" year-over-year earnings growth of 0.4%. But the GAAP figure was the worst since the 2008 financial crisis.

When I mention this to friends of the bullish persuasion, they dismiss this concern by attributing the earnings weakness to the energy sector. But other data, such as the deteriorating performance of high-yield bond borrowers, refutes them; earnings are weak not just in the energy and energy-related sectors, but also in retail, media, consumer products, and other areas. The S&P 500 is now trading at roughly 17 times reported earnings but at more than 21 times GAAP earnings. Neither measure qualifies as cheap.

The website Zerohedge, which remains a beacon of light (and humor) in a bleak financial media landscape, did its own analysis of the spread between GAAP and non-GAAP ("pro forma") earnings to illustrate just how wide the gap has become. Eliminating all of the "pro forma" adjustments that companies use to distort their true financial condition from IBES GAAP earnings produced only $91 in earnings for the S&P 500 for the last 12 months compared to the $118 GAAP figure. 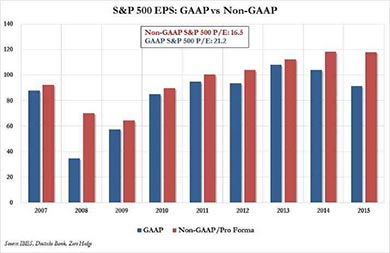 Looking forward doesn't lift the dark cloud. As Societe Generale's Andrew Lapthorne pointed out last week, "Q4 reporting season is leading to significant cuts to 2016 expectations. Whilst similar effects occurred last year, this is somewhat of a departure from the past when year-ahead forecasts tended to be cut steadily throughout the year. It would appear the perennial bullishness in forward consensus numbers is so out of kilter with economic reality that companies are moving earlier to correct this anomaly to the extent the consensus growth forecast for this year is already fast approaching zero."

According to Mr. Lapthorne, "Global 2016 EPS forecasts were cut by 3.6% in over the last four weeks or so: we make that the worst monthly cuts to forward estimates since 2009."

The companies themselves aren't the only ones obfuscating the truth – often, sadly, hedge funds play a role too.

I was struck by a recent news report that fund-of-funds firm SkyBridge Capital withdrew about $1 billion from so-called "event-driven" (i.e. activist) funds managed by John Paulson, Dan Loeb, and Barry Rosenstein in the fourth quarter of 2015.

I have been biting my tongue for a while about activist funds, but I can't restrain myself any longer.

Activist funds proliferated in recent years, but they are a really bad idea for investors, the corporations they shake down, and society at large. For the most part, these funds have produced mediocre returns on both an absolute and risk-adjusted basis since the financial crisis.

Furthermore, in an age when funds have to disclose their positions, it beggars reason why investors need to pay anyone 2/20 to invest in large-cap companies like GE, Dow Chemical, Microsoft, Mondelez, and other recent activist targets. In addition to these egregious fees, which are only justified for truly unique skills, strategies, or talents, many of these funds impose long lock-up periods that further disadvantage investors.

At the end of the day, what special skill do activists really bring to the table? With the exception of Nelson Peltz, none of them have successfully run an operating company; they are mostly financial engineers sending in fast money ideas from the peanut gallery.

Most of them offer completely unoriginal recommendations invariably aimed at maximizing short-term shareholder value like share buybacks, job cuts, capex and R&D cuts, and other ideas that management has already considered and rarely enhance long-term value or improve companies' or the economy's productive capacity. One of their favorite ideas is to urge retailers and other real estate-rich companies to incur large amounts of debt by spinning off their properties into REITs, a world-class bad idea.

Furthermore, few corporate managements have the integrity to tell these investors to take a hike; instead, most of them protect their own jobs and run out and borrow money to repurchase stock to shut them up, leaving their companies saddled with debt. As this chart illustrates, virtually every dollar in buybacks since the financial crisis has been funded by debt. 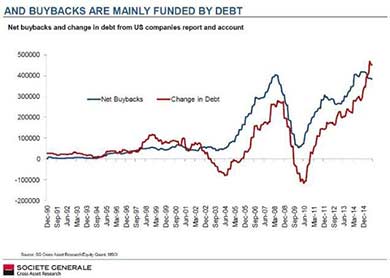 Just as the economy is paying and will continue to pay an enormous cost for all of the pointless leveraged buyouts that loaded Corporate America with debt, it will also suffer the after-effects of the activists for decades to come.
And sadly, the investors who have fallen for their sweet talk will continue to pay as well.

Editor's Note: Companies like VRX – with questionable business models and phony financial reporting practices – are startlingly common in today's market… and they're just one of the many factors pushing the economy towards a $200 trillion "Super Crash." In his free Sure Money service, Michael Lewitt tracks these shady companies (and the activist funds that prop them up), along with other economic trends that are driving markets to the brink. Sure Money is the best way to see what's going up, what's going down, and how to profit. Sign up now by clicking here, and you'll get instant access to all of Michael's investing tips, recommendations, and specific instructions, including his exclusive "Super Crash Report."

Michael,
yesterday VRX had big losses.
Would you suggest to sell vrx 50 june puts
or wait for further losses?