To put it bluntly, the results were bad, and the outlook for 2016 is even worse. 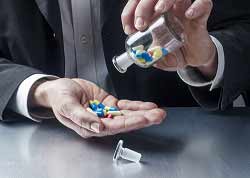 This may allure some investors to buy VRX at a "discount." But before we get to whether you should buy Valeant stock after earnings today, I want to make sure Money Morning readers know the results from Valeant's Q4 2015 earnings report and why VRX is plummeting…

But what is really moving the Valeant stock price today is the company's projections for 2016. For the full year, Valeant expects revenue of $11 billion to $11.2 billion. Valeant had previously estimated it would earn $12.5 billion to $12.7 billion.

On Oct. 21, Citron Research released a report titled "Could This Be the Pharmaceutical Enron?" Citron alleged that Valeant was engaging in sham transactions with pharmacy Philidor Rx to inflate drug sale numbers.

In its scathing review, Citron also noted that R&O Pharmacy filed a claim in September 2015 that Valeant was making an improper payment demand from R&O for $69 million. Citron alleged that Philidor owned R&O, and that Valeant was creating clones of Philidor to create phantom sales and trick auditors.

Valeant has since cut ties with Philidor and recently settled out of court with R&O Pharmacy. But the damage was already done for the Valeant stock price, which has fallen 59% in the last three months.

But is this discounted price a buying opportunity? Here's what investors need to know about the VRX stock price moving forward…

Can the Valeant Stock Price Recover in 2016?

Because of those issues, Lewitt called Valeant the poster child for putting profits before principle. And that philosophy is the company's biggest flaw.

You see, Valeant's predatory business model is not just unethical, it's also unsustainable. Valeant purchases companies with large amounts of junk bonds, fires most of the employees to cut costs, and then it raises the prices of the drugs it acquired. When Valeant acquired Salix Pharmaceuticals in April 2015, it raised the price of a diabetes drug made by Salix from $896 to $10,000.

A number that should have always troubled shareholders was that Valeant only spent 3% of its money from sales on the research and development of new drugs. According to Lewitt, most drug companies spend 15% to 20%.

Valeant had to announce at the end of February that its top-selling gastrointestinal drug Xifaxan is facing competition from pharmaceutical goliath Allergan Plc. (NYSE: AGN). Allergan is seeking permission from the Food and Drug Administration to sell a generic competitor. Xifaxan had $975 million in sales in 2015, according to The Wall Street Journal.

That's a huge loss in sales from just one product if Allergan does receive permission to produce a competitor.

So even though it may appear that the Valeant stock price is trading at a major discount, this is still a stock you want to stay as far away from as possible.