Tesla Motors stock is in focus this week as investors await one of the car industry's biggest events in years.

On Thursday, March 31, Tesla Motors Inc. (Nasdaq: TSLA) will unveil its new Model 3 vehicle, which has the potential to send the Tesla Motors stock price soaring.

Before we get to the impact the new vehicle will have on TSLA stock, here's why the Model 3 is so revolutionary... 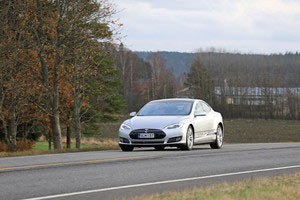 Dubbed the "everyman car" by Tesla CEO Elon Musk, the Model 3 is Tesla's new, more affordable take on its luxury cars. Interest is expected to be very high when the vehicle debuts.

Not much is known about the Model 3, but it is expected to be priced around $35,000. That's before government incentives, which could drive the cost significantly lower.

Tesla will begin taking reservations for the Model 3 on March 31, right after the live unveiling at 8:30 p.m. PT. The Model 3's debut can be viewed on the company's website.

For $1,000 down, customers can reserve a Model 3. Existing Tesla car owners have priority.

While the news is exciting for those looking to buy an affordable Tesla vehicle, it is even more exciting for those investing in Tesla Motors stock. This vehicle and the $488 billion market it targets are two of the biggest catalysts for the Tesla stock price moving forward...

Tesla Motors Stock Will Benefit from This New $488 Billion Market

And with worldwide revenue from electric vehicles forecast to bring in $488.54 billion by 2030, Tesla stock needs an affordable vehicle like the Model 3 to appeal to the masses.

Tesla shares are up a meteoric 497.16% over the last three years and 913.17% over the last five. The Model 3 could send the Tesla stock price even higher.

Still, with the kind of volatility Tesla and global markets have experienced this year, TSLA stock is not for short-term investors. Tesla stock is a momentum play, so any negative news story has the potential to send shares lower in the short term.

But for long-term investors looking to buy and hold a stock for five to 10 years, TSLA stock is an excellent choice.

And with worldwide revenue from electric vehicles forecast to bring in $488.54 billion by 2030, Tesla stock is providing a huge profit opportunity.