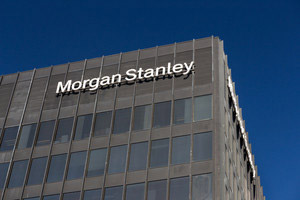 Before Monday's open, the investment bank reported that trading revenue sank 40% year over year (YOY) in Q1 2016. That resulted in a 53% drop in profit. The significant drop in revenue reflects widespread concerns about the economy and the muted appetite for trading that have plagued markets this year.

EPS beats will likely be the theme of this earnings season since the earnings bar has been set so low. Profits, sales, and revenue are still expected to be weak, as was the case in Morgan Stanley's results.

Revenue at the firm dipped to $7.79 billion. That was short of the $7.87 billion analysts expected.

Morgan Stanley and its peers are navigating through a steep slump in debt-trading business. The downturn drove the firm to cut jobs from its trading unit, which weighed down Morgan Stanley's return on equity. ROE is a key measure of a bank's profitability and is a major factor for the Morgan Stanley stock price in 2016.

While most of these earnings figures are bearish, the MS stock price today is still mostly flat. But Morgan Stanley stock still faces a number of headwinds as we look ahead in 2016…

What's Next for the Morgan Stanley Stock Price in 2016

Morgan Stanley Chief Financial Officer Jonathan Pruzan cautioned earlier that January and February were "extremely turbulent" months for its trading business. But he was quick to add that March and April brought notable improvement.

And the environment remains challenging…

Investment banking revenue fell 16% to $990 million from $1.17 billion in the first quarter a year ago. Fees from mergers and other deals rose 25% to $591 million, while revenue on stock and bond underwriting slipped 43% to $399 million.

Seven years of near-zero interest rates have tempered results at Morgan Stanley and other banks. And that's caused the Morgan Stanley stock price to fall nearly 5% in the last five years. During the same time, the Dow has climbed more than 45%.

While rock-bottom rates lower banks' borrowing costs, it has also limited what they can charge on loans and earn on other investments. The difference between the two – the net interest margin – has been declining since 2010. In short, bank stocks are trading like we're still in the 2008 financial crisis era.