Being based in China worked for Alibaba stock in 2014 when the company went public, but lately has been more of an anchor.

That's why BABA stock is our Pick of the Week.

Money Morning Defense & Tech Specialist Michael A. Robinson thinks Alibaba stock is a bargain now, noting that the company has "a strategic depth that foreign companies can't even buy."

Alibaba was founded in 1999 in Hangzhou, China, by a former English teacher named Jack Ma and 17 others. He chose the name "Alibaba" because of its global recognition.

The group recognized the Internet would allow a small startup like Alibaba to create an online global marketplace. Originally the website was a business-to-business portal to help small Chinese exporters sell their goods internationally.

Within a year Alibaba was attracting venture capital, including a $20 million investment from SoftBank. Growth was steady, and by December 2001 the site had 1 million registered users and was turning a profit.

Today, founder Jack Ma is still head of the company. Alibaba has 36,465 employees.

What You Need to Know About Alibaba Stock 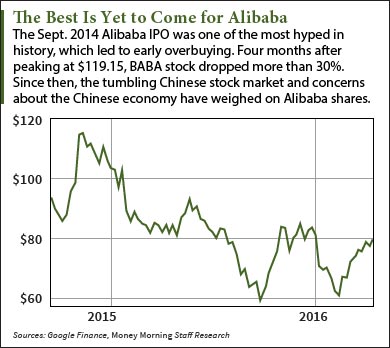 For U.S. investors, Alibaba stock is still relatively new. It's been less than two years since BABA stock started trading on the New York Stock Exchange.

And in that time, Alibaba stock has gotten a bit of a bad rap. Massively overhyped and somewhat overpriced at the IPO, the Alibaba stock price did rise for several months. But investors soured on the company after that, launching a four-month slide that lopped 30% off the BABA stock price.

Logical, maybe, but in Alibaba's case not quite accurate…

Why BABA Stock Is a Buy

It's not that investors are wrong about China's economic problems. Growth is slowing. On Friday we learned that China's growth rate in Q1 was 6.7% — its lowest since 2009.

And they're still buying things.

"China's economy is transforming into a consumer-driven one, much like the U.S. economy," said Robinson. "And don't forget that the U.S. economy is barely growing at 2%, so even if China isn't firing on all cylinders, it's still trouncing the growth in other parts of the developed world."

As China's dominant e-commerce company, much like Amazon.com Inc. (Nasdaq: AMZN) in the United States, Alibaba is ideally suited to profit from that country's rising consumer spending.

It's right in the Alibaba earnings reports. In the December quarter, annual active buyers rose by 21 million to more than 400 million. Mobile monthly active users increased by 47 million to 393 million.

Alibaba isn't standing pat, though. Recently it has stepped up efforts to bring foreign brands to Chinese consumers, which will provide yet another avenue of growth.

Alibaba has branched out into other promising businesses as well.

Its cloud business is relatively small (2% of revenue) but grew at a rate of 126% year over year in the December quarter. Last year Alibaba bought Youku Tudou Inc., the YouTube of China, to set itself up as China's leader in online video.

Robinson is intrigued by another Alibaba project with vast potential, a prescription-filling service that delivers the drugs to the patient's home.

"There's a lot of money to be made here," Robinson said. "Healthcare spending in China is expected to rise from about $350 billion last year to a $1 trillion by 2020, according to McKinsey. That's as good as a triple in four years."

Fortunately for investors, concerns about China have left Alibaba stock undervalued. On Friday, the BABA stock price slipped below $79.

The consensus one-year price target for Alibaba stock is $92.70, a 17% gain from the current price. But given Alibaba's prospects, that's low.

According to Morningstar, Alibaba is expected to grow earnings at an average of 28.5% annually over the next five years. That means Alibaba's earnings will double in less than three years.

A more realistic one-year target is $103. And in the three- to four-year range, the BABA stock price is headed into the neighborhood of $150. That's a double from the current Alibaba stock price.

"Some of the biggest players in the global market are paring down their China exposure right now," Robinson said. "That's great news for us, because it means we can get Alibaba at a price virtually everyone else is missing out on."

In Case You Missed It: Last week's Pick of the Week is a social media stock that's done quite well. But two Money Morning experts consider it a "must-have tech stock" in any portfolio. What many don't realize is that this company has figured out a way to monetize social media that's head-and-shoulders above what anyone else is doing. Find out why this is an investing opportunity that comes along only once or twice in a lifetime…