If you love cars like I do, you know that the auto industry keeps a tight lid on the details, including images, of cars set to be released in the future.

But Motor Trend, an automobile magazine that features the latest and greatest in car news, got the jump on Apple Inc. (Nasdaq: AAPL), tweeting out the first so-called image of Apple's "secret" electric car that's rumored to be released as early as 2019 or 2020.

Apple, of course, will not comment, neither confirming nor denying the existence of its electric car initiative, called "Project Titan." But its efforts to keep its plans classified haven't quite succeeded… making the possibility of an Apple car more of an "open secret" within the automotive and technology industries.

Now, skeptics say there's no room for a newcomer, like Apple, to rival the likes of Tesla Motors Inc. (Nasdaq: TSLA) when it comes to electric cars (or cars in general), while optimists say Apple could revolutionize the auto industry, boasting of the historical milestones it's already made in the technology industry.

No matter who ends up being right, Apple's "secret" is out, making it the prime time to capitalize on huge opportunities. 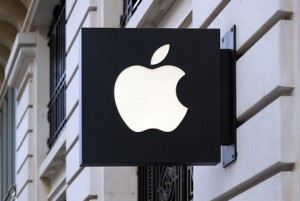 Last week, we talked about LEAPS (options with longer expiration dates of up to two years) and how trading them is a great alternative to shorter-term options and buying the stock outright.

And the recent Apple "leak" is the perfect opportunity to look at two LEAPS trading setups that could position you for triple-digit gains by the time the Apple car is released.

What we're going to do is look at a hypothetical scenario in which two traders take a bullish position on Apple but have two very different LEAPS trading ideas. We're also going to look at the risks and benefits of each, which can help you determine the type of LEAPS trader you might be and the trading strategy that might suit you best.

After learning of the Apple car "leak" and seeing the way the stock reacted, traders Abe and Bea both see AAPL going to $140 per share – or higher – but believe it will take some time to get there… possibly up to two years.

They also both believe in leveraging the power of options to reduce the cost to participate in this movement, as they don't want to pay $112.10 per each share of stock they'd like to control. They decide to trade LEAPS because they know that LEAPS options are even cheaper than standard options.

But here's where Abe and Bea differ…

Abe is a "get more bang for your buck" kind of trader who has a set goal of profitability over probability when it comes to his trades. He knows that his percentage for successful trades decreases with this trading mindset, but he believes that the ultimate payoff is worth the risk.

Bea, on the other hand, is more interested in a return of her money than a return on her money. As a more conservative trader than Abe, she prefers trading based on a higher probability of successful trades over merely a higher profit. Unlike Abe, she is happy with taking on a less risk, less reward strategy.

Here's how they decide to play the Apple "leak"…

The Costs of Each Setup

Just as Bea wanted, the cost of her trade was less than Abe's, who spent nearly twice as much on his trade.

The Risks of Each Setup

As a LEAPS traders, Abe's and Bea's maximum risk is 100% of their costs to open the trade. Since Abe spent $543 more than Bea on his trade, his long LEAPS call trade has more risk than Bea's LEAPS bull call spread.

Note: When it comes to your trades, keep in mind that you can place a stop wherever you like and can minimize your risk by creating a LEAPS call spread, just as Bea did.

The Profit Potential/Return on Investment of Each Setup

With calls, when the stock price goes up, so should the option's value. Now, Abe took on greater risk for greater reward potential and technically has an unlimited reward potential (up to the close of market on the date of expiration).

Consider it this way… For every $10 in-the-money move AAPL makes, Abe gets a $1,000 potential increase in the value of the option.

But Bea, who prefers smaller risk and smaller reward, does not quite have that unlimited reward potential…

Depending on how AAPL moves, Abe has the possibility of banking a great return on investment… or none at all. Ultimately, the stock has to work harder and go higher for greater profit potential.

Since Bea opened a call spread, she only needs AAPL to move slightly above the $140 strike price of the calls she sold-to-open to realize her maximum profit potential. With a spread, LEAPS or not, the stock doesn't need to work as hard to offer at least a 100% return on investment or better.

On the one hand, you can aim for a higher payoff, which requires more risk… like Abe.

On the other hand, you can aim for less risk, which offers less reward… like Bea.

Only you can decide, but the trade scenarios above can help you determine the best way to play the Apple "leak."

Supersize Your Rewards with This Buy-and-Hold Strategy: Their short-term nature can make options tricky. But what if you could leverage the power of options with the luxury of time to secure triple-digit returns – without spending a dime on a single share? This method does exactly that. Now, it's got its risks, but it could be your best chance of surviving these markets…