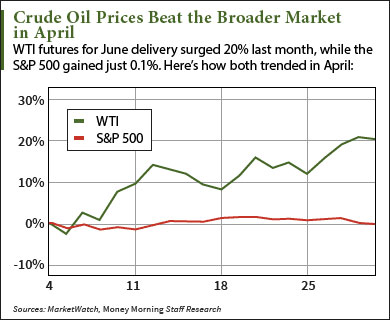 After last month's rally, crude oil prices today (Monday, May 2) kicked off May on a weak note.

This Report Is Dragging Down Crude Oil Prices Today

A surge in OPEC production last month is causing the drop in Brent and WTI crude oil prices today.

According to Reuters, OPEC pumped 32.64 million barrels a day in April. That's up 170,000 barrels from its March output. And it falls just short of the cartel's January output of 32.65 million a day, which was the highest in nearly two decades. The production data would have been higher had it not been for the Kuwait oil strike and other countries experiencing supply disruptions.

Most supply concerns still center on Iran, which is quickly boosting output to a pre-sanctions level of 3.5 million barrels a day. Investors worry the troubled OPEC country will use its 157 billion barrels of oil reserves to flood the market and suppress the crude oil price.

"Iran needs outside help fast," Moors said on March 17. "For all the talk of Iran increasing exports, that rate will take some time to reach and isn't sustainable given the current state of its equipment and infrastructure."

What to Expect from Oil Prices in 2016… Crude oil prices have staged a massive rebound over the last two months. Despite the rally, oil is slowly becoming less significant in the broader energy sector. That's why our new 2016 price forecast takes into account this emerging energy mix. Here's how you can profit from oil's role in this "new energy age"…

Dollar dollar! I'm surprised oil down so much right now with the dollar being down .50 again. Oil shouldn't be in this price range in the first place, should be in the 30s but the what the hell. For some reason I think something going to come out later to give a reason for oil to go back up might even see 50 by the end of the week.