Washington's made a huge stink about our economic recovery, and politicians of all stripes want us to believe that their actions are in the name of your financial prosperity.

What a load of you-know-what.

I'm not going to mince words - our government is killing the American Dream and, with it, the retirement hopes of millions of investors.

Thankfully, though, not yours.

Today we're going to talk about why the U.S. government's latest boneheaded move actually clears the path for bigger profits, and how you'll know what to buy both now and in the future when you see them repeat their mistakes.

It's another case of something we talk about frequently as part of the Total Wealth approach - the strong always survive.

Chances are, you saw the litany of headlines that broke last week when the U.S. Department of Justice moved to block the $28 billion Halliburton Co. (NYSE: HAL), Baker Hughes Inc. (NYSE: BHI) mega-merger.

The press, of course, had their opinion:

Mine is very different.

The headlines should have read that regulators "Fleeced Investors Out of Billions (Again)."

People don't realize it, but the Justice Department, working in concert with a wide variety of Washington agencies, has canned a number of deals over the past few years including Sysco's attempt to buy U.S. Foods, Comcast's attempt to purchase Time Warner Cable, Staples and Office Depot, just to name a few. Things are so egregious that even Bumble Bee was stopped from buying Thai Union, which makes Chicken of the Sea, for crying out loud. Tuna fish!

Stopping Halliburton from buying Baker Hughes is par for the course under the circumstances. The sad thing is that this costs the investing public billions and stands in complete contradiction to the spirit of free enterprise.

Big companies are not anti-competitive. Antitrust laws are.

Originally created to ensure competition, now they're used to stop it - something the government is doing with increasingly frequency in recent years. 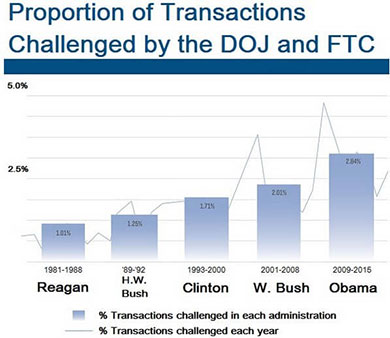 Antitrust laws have their roots in the Sherman Act of 1890 and the Federal Trade Commission Act and Clayton Act of 1914, all of which are intended to ensure lower prices, efficient competition, and higher quality in the name of consumer protection.

That sounds great, right? But here's the rub...

Unlike most laws, which have a very clear-cut basis for what's right or wrong, antitrust laws are based on an unreasonable restraint of trade. That means they're decided on a case-by-case basis.

Obviously certain things like price fixing and bid rigging are so blatant that they're considered "per se" violations, a legal term meaning there is no justification nor allowable defense under the law.  But - and you'll see where I'm going with this in a minute - violations are determined one by one.

That's what happened with the Halliburton/Baker Hughes deal. The Justice Department, acting on input from global regulators worried about competition and product development in more than 30 markets, iced the deal.

This makes plenty of sense to government watchdogs who would rather use government policy as a punitive measure than a tool for national ambition and success, but no sense whatsoever to anybody interested in actual competition, let alone profits.

In this case, Baker Hughes had developed oil service technology that Halliburton couldn't. Rather than spend billions to create it from scratch, Halliburton, which is ranked No. 2 in the industry, chose to buy No. 3 ranked Baker Hughes as a means of taking on the No. 1 ranked oil services provider, Schlumberger Ltd. (NYSE: SLB).

The Justice Department agreed and blocked the deal.

Never mind that this country and capitalism are based on opportunity, not coercion. Government apparatchiks cannot understand the very fundamentals of capitalism, let alone how money actually works.

The hypocrisy is staggering.

Microsoft isn't going to roll over and let Apple take over huge sections of its business simply because they're too dominant with a 90% market share. The DOJ's said nothing.

Amazon isn't going to pause to let Alibaba gain ground because they're feeling guilty about the fact that the company accounted for more than 50% of 2015 e-commerce volume growth last year. The DOJ's taken no action.

Facebook isn't going to slow down now that it accounts for 43.9% of all social media site visits, let alone give that back to MySpace because they've been too successful. The DOJ's been silent.

Buying a competitor is a natural part of the competitive process and something that's done all the time to preserve and grow market share, especially when a competitor has key technology that makes for an even better offering.

That was the case with the examples I just mentioned but also with companies like Becton, Dickinson and Co. (NYSE: BDX) when it bought CareFusion Corp. in 2015. In fact, we specifically noted the merger as a catalyst for higher profits when I brought it to subscribers' attention in our sister publication, the Money Map Report, and gave anybody who followed along the opportunity to capture triple-digit returns of at least 127%.

Nobody raised a stink when Vincent Forlenza, Becton Dickinson's Chairman, noted specifically that the deal was a major milestone in the company's 118-year history and "significantly accelerates BD's strategy" ... "as we become one of the largest global leaders in medical technology" - (emphasis added).

There's something else, too.

When Washington Plays into Your Hands

Washington claims it supports free enterprise and competition at a time when American jobs are hard to come by and tax avoidance has all but become a corporate spectator sport. You'd think they'd be all over a deal with such widespread benefits.

Instead, Washington killed it.

There were no plans to move the newly-formed company to Ireland like there were with Pfizer/Allergan, nor were there plans to shelter income in remote island locales unbeknownst to everybody except possibly Panamanian lawyers.

What you had was a situation where two American companies were going to merge, create plenty of shareholder value and gobs of jobs around the world so that they could survive in the face of an oil services industry dominated by Schlumberger, a foreign competitor.

It was a deal that would have established real competition and given millions of shareholders the ability to benefit from higher quality, better pricing and higher profit margins, all of which flow through to the bottom line and, in turn, create higher share prices down the line.

Those who fear deals like this one say that mega companies rip off the public and threaten innovation. If that's true ask yourself why the benefits of teaming up outweigh the costs of remaining isolated, weak, and alone every time.

At the end of the day the only true monopoly is the government because it's the only entity capable of using force to intervene in otherwise free markets. Businesses cannot force consumers to do anything in truly free markets.

Now, let me get off my soapbox for a moment and talk about how you make money in a situation like this. I want to do that because I guarantee you that you'll see another situation just like it again and I want you to know how to profit when it does.

In this case, Halliburton went after Baker Hughes because the former could not replicate the advanced technology and services that the latter was using to boost sales. So it did what any savvy competitor would do... made a move to buy it. Baker Hughes was not selling because it was failing.

So... thinking like a CEO and using a bit of common sense... that means Baker Hughes has the upper hand simply because they have a competitive advantage that's so valuable another company - Halliburton - was willing to fork over billions to get their hands on it.

You don't have to pay billions, but I'd be thinking seriously about buying Baker Hughes even if oil prices reverse and even if there's more selling ahead in the short term.

The company is going to book $3.5 billion because the deal failed and use that to buy back $1.5 billion in shares and reduce debt by another $1 billion. At the same time, the company is going to use the failed merger as an opportunity to reduce costs by $500 million or more, simplify its operational structure, and optimize its financials.

Bear in mind that Baker Hughes still has the technology that made it such an attractive target in the first place. That hasn't changed.

Ergo, the company is still able to press on with sales, innovation, and production.

Halliburton, on the other hand, is weak, still suffering from competitive threats, and will have to seek other deals to maintain its competitive position. That's both an expensive and time-consuming proposition. It's also a more indirect path to profits.

Ironically, the Justice Department's actions are going to worsen the competitive landscape, not improve it as people think.

That's because both Baker Hughes and Halliburton now have to focus their attention on cost cutting to compensate for the failed merger. Consequently, the rest of the industry will have to deal with the resulting economic pressure that comes from falling wages, rising layoffs, and equipment that goes fallow as margins collapse. Dozens of companies are going to get hit hard.

With friends like the Justice Department, who needs enemies?!

Editor's Note: Washington's anti-business agenda doesn't just block profits for corporate giants, but individual investors as well. Fortunately, Keith's investing tactics make it possible for his readers to secure profits in any market environment - and the government can't do anything to derail it. In fact, it's pretty simple. Get Keith's full tactics report - completely free - right here.

You guys are idiots. i'm glad Baker Hughes didn't get bought out, Halliburton is too big and powerful anyway. they been screwing the American public for years.

I can only imagine that your parents are proud – opening with an insult rather than a greeting. If making investors billions, employing tens of thousands, and paying hundreds of millions in taxes constitutes "screwing" the public, respectfully it is you, Sir, who appear to be the idiot.

The author comments that no-one is forced to buy or sell. EVER, This is not true. The US Government under the auspice of national security can force any US based company International or not to sell them material deemed necessary.

I've seen it done before any I'm sure they will do it again.

Sounds like their own personal monopoly. Does it not.

And, the author also noted "At the end of the day the only true monopoly is the government because it's the only entity capable of using force to intervene in otherwise free markets. Businesses cannot force consumers to do anything in truly free markets."

Try reading all the way through before you hit the keyboard next time.

I think Keith is one of the most reasoned, logical analysts out there even if I don't always agree with him.

Yes, Keith Is! A Darn Good seasoned Vet
That knows what the heck is going on!
I may not like the service all the time, but
I really appreciate Keith and his moxie!