The world is a different place today (Friday) after Britain voted to leave the European Union. But for investors, the Brexit news is absolutely crushing global markets today. 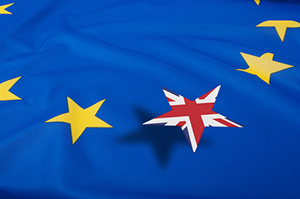 Before we get into those three portfolio protectors, here are some details on how global markets reacted to today's Brexit news…

The Brexit vote means the UK will sever ties with the EU after 43 years. British Prime Minister David Cameron announced he would step down in the wake of the Brexit win.

London's FTSE 100 immediately plunged more than 8% at the opening today following the Brexit news. By mid-day, the benchmark had trimmed losses to 3.7%, thanks to its heavy weighting in international companies.

The FTSE 250 index tumbled 8.6% after the Brexit news today. That marked the index's worst day in at least two decades.

Other global markets were rocked by the Brexit news as well. Japan's Nikkei shed 7.9%, and Germany's DAX lost 7.2%.

Currency prices were falling Friday, too.

The British pound traded as low at $1.3230 in early trading. That was the lowest level versus the U.S. dollar since 1985. It was also a dramatic reversal from the high for the year it logged just a day earlier.

Banks said they were putting all currency forecasts under revision following the Brexit news.

The key question is where markets go from here.

The UK referendum is expected to jolt the U.S. economy. But the long-term effects are unknown. A rate hike from the Federal Reserve seems very unlikely in the near future, however.

Today's extreme reactions to the Brexit news show the complacency many investors were feeling ahead of the Brexit vote.

With volatility and uncertainty expected to be around for a long time, here are three ways to protect your money as Brexit news continues to break…

Protect Your Money Following Brexit News with These Three Moves

Buy Gold: The yellow metal is a safe-haven money alternative that acts like an insurance policy against geopolitical risks, currency debasements, and stock market tumbles. It's the go-to asset during times of distress. Investors have piled into gold in 2016, driving the yellow metal up roughly 20% as of Thursday. Following the Brexit news, gold prices surged 5.4% to a 27-month high of $67.80. Gold coins and bars are the purest way to invest in the precious metal. But investors who prefer to play the shiny metal via the stock market can find the best gold stocks to buy in 2016 here. They are among this year's best performers.

Short the S&P 500: Take advantage of a pullback in stocks and expected future declines by shorting – or betting against – the broader market. The ProShares Short S&P 500 ETF (NYSE Arca: SH) allows you to do this with ease. This $3.03 billion market cap exchange-traded fund rises every time the S&P 500 falls, allowing you to profit from market declines. SH rose 2.33% to $40.42 Friday amid the sharp global sell-off. Keep in mind that shorting stocks is always a risky proposition.

Hold Cash: In a world awash in negative rates and diminishing currency valuations, the U.S. dollar stands out. Holding cash is not exciting, especially in today's near-zero interest rate environment in the United States. But keeping a cash stash offers investors the opportunity to buy beaten-down stocks at attractive prices in the event of a stock market crash.

Your Money Morning Guide to Investing in Gold and Silver: There are very few assets that have held their value longer throughout history than silver and gold. That's why the two metals are universally considered the best safe-haven investments out there. To give you a better understanding of how to participate in the metals market, we developed this guide to show you how to buy gold and silver…

Brexit may be the first hurdle to overcome in the coming firnancial collapse.