Already decried as the bogeyman of American politics, super PACs don't even have the decency to obey the few rules required of them under U.S. election law.

Companies that do business with the federal government are banned from donating to super PACs. But according to The Hill's investigation, ignoring the ban "has become widespread in both congressional and presidential politics."

Not surprisingly, super PACs supporting both Republican and Democratic candidates are guilty of breaking this law.

The super PAC (political action committee) era began with the Supreme Court's Citizens United decision in 2010, when it ruled political fundraising is a form of free speech. The ruling forbids the federal government from setting restrictions on the raising and spending of political money by nonprofit groups.

Super PACs quickly sprung up to exploit the ruling. They can raise as much money as they want and mostly spend it as they please to promote causes they support, either candidates or issues. And they don't even need to disclose the identities of the donors - so-called "dark money."

You'd think that such freedom would be good enough for the super PACs. But it hasn't worked out that way...

For Super PACs, Any Rule Is One Rule Too Many

The super PAC rules under federal law are few:

But watchdog groups have established that super PACS routinely violate two of these three basic rules. 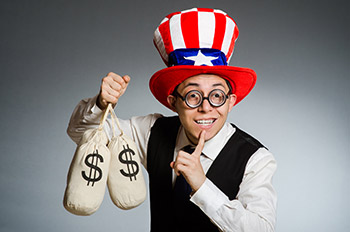 In addition to taking money from federal contractors, super PACs increasingly have been coordinating their efforts with the candidates they support.

Again, candidates from both parties do it. And few seem to care that they're violating federal election laws.

"The rules of affiliation are just about as porous as they can be, and it amounts to a joke that there's no coordination between these individual super PACs and the candidates," Rep. David E. Price (D-NC) told The Washington Post last year.

All of which begs the question: How do the super PACs get away with flagrantly breaking the law?

Here's the perfect storm that makes it possible...

Why Super PACs Face No Consequences for Ignoring Election Laws

Much of the problem of scofflaw super PACs lies at the doorstep of the Federal Election Commission (FEC), the agency charged with enforcing election regulations.

For one thing, the FEC did a lousy job of writing the regulations, which are vague and confusing.

"If you talk to three lawyers, you are likely to get three different answers," Phil Cox, executive director of America Leads, a super PAC that backed New Jersey Gov. Chris Christie's presidential campaign, told The Washington Post. "The system makes no sense."

So the super PACs have a field day exploiting loopholes. For example, the employees of a federal contractor are allowed to donate to a super PAC even though the corporate entity isn't. Another loophole lets companies funnel donations through subsidiaries that are not named on government contracts.

One reason this doesn't get fixed is that the six-member FEC is by law split evenly between Democrats and Republicans - a built-in gridlock.

As The Hill points out, the FEC's partisan divide is so bad "it has proved incapable of deciding even the most basic questions, such as whether to investigate complaints."

Back in 2012, the Los Angeles Times revealed several federal contractors that had donated to Restore Our Future, a super PAC that supported Mitt Romney's presidential campaign.

Not a single federal contractor was ever penalized.

"Every political operative and campaign knows that the FEC will not enforce the campaign finance laws," Fred Wertheimer, president of watchdog group Democracy 21, told The Hill.

The history of lax enforcement has encouraged super PACs to keep pushing the limits of what they can get away with.

This has proven particularly true regarding cooperation between candidates and super PACs...

Super PACs Get More Brazen with Every Campaign Cycle

You see, some level of communication is permitted. Campaign operatives are allowed to talk to super PAC staff, but aren't supposed to discuss strategy. They can also share consultants, media buyers, and fundraising events.

In addition to being nearly impossible to enforce, the fuzziness of the rules invites cheating. Candidates post video footage custom-made for TV ads on their websites to be downloaded by the super PAC, which can use any publicly available material.

And get this - many super PACs are run by people who used to work for the candidate the super PAC supports.

Despite dozens of complaints, the FEC has never opened an investigation into illegal coordination between a candidate and a super PAC. Meanwhile, the super PACs push the boundaries more every year.

"These super PACs are more and more operating as arms of the campaigns," Ellen Weintraub, a former campaign finance lawyer, told the Los Angeles Times last October. "Our inaction is feeding a culture out there that says political actors don't really have to abide by the rules, because if they don't, nothing is going to happen."

The Bottom Line: While super PACs have few rules to abide by, they've ignored them from the start and have become increasingly bold about it with every election cycle. Meanwhile, an impotent FEC, hamstrung by poorly written regulations and partisan infighting, remains helpless to address the problem.

When Robber Barons Bought a President: The super PACs are a relatively new phenomenon, but the influence of big money in American politics is not. It was more than a century ago that the legendary robber barons - led by J.P. Morgan and John D. Rockefeller - used their fortunes to buy a presidency. Here's how they made it happen...