A small measure of stability has returned to markets early this week after a ferocious bout of volatility that wiped $3 trillion from the world's balance sheets in the worst two-day sell-off of all time.

Many investors are understandably nervous about what's next.

Chances are, the Brexit is probably not the first financial temper tantrum you've lived through, nor will it be the last. Getting all worked up about it just isn't worth the aggravation.

Today we're going to talk about why, and what you need to do to build up a profit-positioning reflex that the world's most successful investors regard as second nature.

It's deceptively simple, elegant, and easy to execute. What's more, once you've built up the reflex I'm going to talk about today, you'll know how to immediately position yourself for profits the next time markets pitch a fit.

And, you'll have a huge advantage over other investors.

I've been intimately involved with the markets now for 35 years as a trader, a consultant, and an analyst, and stuff like the Brexit comes and goes more often than any of us would care to admit. The Internet and 24-hour news cycle we live with today just makes it seem worse. 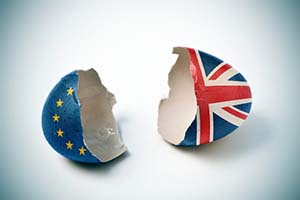 For example, I vividly recall Black Monday in 1987 – my first major crash. It, too, was unprecedented, and in the pre-Internet days the news headlines were going bananas. Cell phones were in their infancy and smartphones were just a pipe dream. People were forced to wait for the breaking headlines, which meant they actually had time to think.

There is no doubt in my mind that we're going to see more "exits" – every one of which will be held up in the media as a sensational event "unlike anything we've ever seen before."

Somewhat tongue in cheek, here's what I think we're dealing with…

There will be more… a Frexit (France leaving), a Spexit (Spain leaving), a Nexit (the Netherlands leaving).

At the end of the day, the European Union (EU) could shrink all the way to "Ditchland."

I am not trying to ruin your day here.

What I want you to come to terms with is the flawed notion that a crisis like the Brexit is a "one and done" event. That's naïve at best, and wishful thinking at worst.

Click here to learn more about Keith's high-profit investing style and get his profit recommendations yourself.

Instead, I want you to use this crisis just like savvy investors before you have used every other crisis they've ever lived through… as an opportunity to make yourself filthy, stinking rich – Total Wealth style.

Think about why we do what we do for a moment, why we're here, and why we're able to consistently identify profits others don't see:

Since we've been investing together, I've helped you identify fabulous opportunities that have led to spectacular performance and thrashed the markets. Examples include Becton, Dickinson and Co. (NYSE: BDX), American Water Works Co. Inc. (NYSE: AWK), and Altria Group Inc. (NYSE: MO). These "must-have" investments have beaten the markets over time by as much as 44 to 1.

I've also helped you aggressively hunt down the weakest companies, like Shake Shack Inc. (NYSE: SHAK), Twitter Inc. (NYSE: TWTR) and GoPro Inc. (Nasdaq: GPRO), often at times when Wall Street was enamored with them. They've produced double-digit profits for everybody who's following along, as I hope you are.

To be clear, I am not telling you this to brag. I make my share of mistakes, too.

What I want you to understand is that there's always opportunity – and the Total Wealth Principles, Tactics, and approach will help you find them when other investors cannot and the headlines make doing so seem impossible.

Capturing profits during challenging times doesn't start with analysis or even data. It starts with the person who looks back at you in the mirror every morning.

Just like riding a bike or learning to cook a five-star meal, you have to build up the reflexes needed to handle an event like the Brexit profitably.

The overwhelming majority of investors run for the hills when the markets go haywire, which is why their portfolios are a fraction of what they could be, and why they repeatedly miss out on the enormous gains they so desperately want.

But the best investors and the most consistently profitable players have a very different take. Many run straight into the fire knowing full well that they've got the advantage – not to mention plenty of profit potential.

They're net buyers, and I want you to be one of 'em.

You don't have to bet the farm or even make a major purchase. Even a single share of something will do.

My goal is to help you build up the reflex needed to capitalize on chaos, and the mental strength that will allow you to view every major market event as an opportunity… not an excuse to bury your head in the sand.

And that comes from doing… just like riding a bike.

A single of share of Alphabet Inc. (Nasdaq: GOOG), for example, would have set you back $663 on Monday if you swooped in when it hit rock bottom. It's trading at $687 as I write this.

If that kind of volatility isn't your thing, consider some of the more defensive plays we've talked about this year – names like Raytheon Co. (NYSE: RTN), Altria Group, and American Water Works Co.

They didn't drop all that much because they're attracting capital, so there's implied stability and profit potential to boot.

Now, I've talked to tens of thousands of investors over the years, and many think that they're going to outsmart the markets by waiting for a pullback "when the recovery starts."

The pullbacks they're longing for no longer exist. Approximately 70% of today's trading volume is driven by computers, which means price movement is more like a dogpile. If you're not in when it starts, you miss 80% of the move… perhaps more.

Lots of investors sold out in a panic as the S&P 500 and the Dow collapsed. They felt great because they "got out of the way" or "didn't try to catch a falling knife" – comments I heard repeatedly during presentations around the world, and that were echoed in a blizzard of email.

That didn't last very long though.

Many investors fantasize about really big returns, but very few actually have the reflexes needed to achieve that – which is why we're having this discussion today.

They like to think it's the headlines, or the economy, or China, or any of half a dozen other scary things that's caused them to lose out.

But that's not the case.

They're simply missing the reflex they need to overcome their fears.

To be clear, I am not saying that you need to buy indiscriminately every time the markets falter. There are going to be times when the stuff simply hits the proverbial fan. But even that doesn't change the reflexive behavior we're talking about today.

Learn to overcome your fears for a darn good reason…

…because doing so can help you be far more profitable.

You're doing great and you're here as a member of the Money Morning family, which gives you a tremendous advantage over other investors who are not.

I will be with you every step of the way.

The Brexit isn't the only profit-generator at work in the markets today. The "Unstoppable Trends" Keith follows to profits are truly global in nature, which means there's always a profit opportunity. Click here to get Keith's research twice each week at no charge, and you'll get his latest investor briefing on a stock that could soar 420% as America's most expensive election ever gets underway.

What's going on with EKSO? Why is it dropping like a stone when all those good things were happening?

i expect a lot of good news

I'll try this out.

I have to ask the same question as David Schroeder…What is the matter with EKSO? I've been in it for a couple of years. I hope it's not a copy cat of PMTS!
Mandy