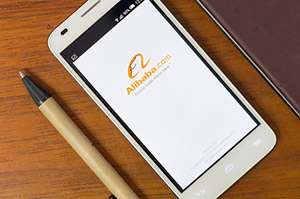 The Alibaba stock price is soaring 5.5% to a 52-week high of $92.76 today (Thursday) after the company crushed earnings. BABA stock is now up nearly 8% in the last five trading sessions.

But Money Morning experts think this is just the start of the Alibaba stock price rally.

We've been bullish on Alibaba Group Holding Ltd. (NYSE: BABA) stock since it hit the market in 2014. It has been volatile since coming to market, but investors who followed our re-recommendation in February have banked gains of 51% in six months.

Before we get into why we remain bullish on the Alibaba stock price in 2016, here's why the stock is soaring today:

Alibaba has been expanding and diversifying its business as it faces the prospects of a saturated online retail market in China.

In April, Alibaba acquired Singapore-based online retailer Lazada Group for about $1 billion to boost its presence in Southeast Asia.

Alibaba has also been venturing into cloud and driverless vehicles as it looks for fresh areas of growth.

Back in April, Money Morning Director of Tech & Venture Capital Michael A. Robinson said the Alibaba stock price was undervalued near $80 per share and that the company has "a strategic depth that foreign companies can't even buy."

"China's economy is transforming into a consumer-driven one, much like the U.S. economy," said Robinson. "And don't forget that the U.S. economy is barely growing at 2%, so even if China isn't firing on all cylinders, it's still trouncing the growth in other parts of the developed world."

Of the 42 analysts that cover Alibaba, 32 rate the stock "Buy." Three maintain an "Overweight," and seven have a "Hold." The average price target is $98.72, according to data from The Wall Street Journal.

Editor's Note: Most people associate the Bill Clinton years as a booming era for the economy. But that couldn't be further from the truth. Here's why…

22870 Reads
Sell These 3 REITs Before It's Too Late
We love REITs, but they aren't created equal. These three REITs shouldn't be anywhere near your portfolio.