The best tech stocks to buy now are those on the cusp of exploiting a major new shift in how people use technology - something that's happened several times before and is about to happen again.

Back in the 1980s, the best tech stocks to buy were those that were pioneers in the PC industry, like Microsoft Corp. (Nasdaq: MSFT) and Apple Inc. (Nasdaq: AAPL). 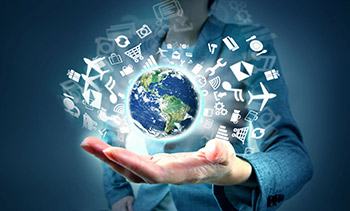 When the Internet came along in the 1990s, the best tech stocks to buy were companies like Amazon.com Inc. (Nasdaq: AMZN) and eBay Inc. (Nasdaq: EBAY).

Now we're at the beginning of yet another lucrative tech revolution -- the Internet of Things.

The term "Internet of Things" is shorthand for a new paradigm in which many of the things we use, from home appliances to the cars we drive, will connect to the Internet (and each other) using the same wireless networks as our smartphones.

Business Insider Intelligence estimates that by 2024, the number of devices connected to the Internet of Things will triple from 10 million to 34 million, with spending over the next five years totaling $6 trillion.

Of course, this revenue will be spread out among many different types of companies. Some of it will go to tech titans like Apple, Microsoft, and Alphabet Inc. (Nasdaq: GOOGL, GOOG) as they develop a variety of connected devices and services.

And some will go to startups that find new ways to exploit the huge Internet of Things opportunity.

But for investors today, the best stocks to buy now to profit from the coming Internet of Things revolution belong to one sector in particular...

Where to Find the Best Tech Stocks to Buy Now

The chipmakers are sitting on a tremendous opportunity. According to data from industry association SEMI, the Internet of Things market for semiconductors will double from $27.6 billion last year to $53.1 billion in 2020 and more than quadruple to $114.2 billion by 2025. 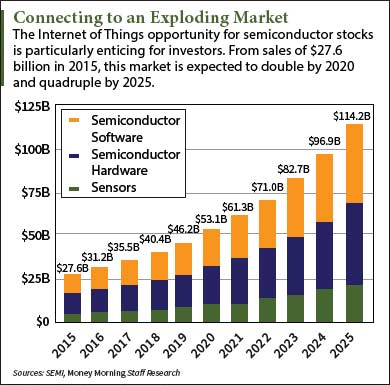 And make no mistake, the semiconductor companies are vital to the Internet of Things. They'll be making the chips required for wireless communications as well as the memory and sensors embedded in those millions of devices.

At the same time, this is a segment very unlikely to see any disruptive new competitors. Chip fabrication is far too costly for a startup, as the foundries cost billions to build.

We also know now which semiconductor companies are making the investments in Internet of Things technologies that will pay off tomorrow.

And that makes these companies the best tech stocks to buy ahead of the Internet of Things explosion...

Several semiconductor stocks have positioned themselves to benefit from the growth that the Internet of Things will make possible over the next decade:

Qualcomm has dominated the market for smartphone chips in recent years, but realizes future profit growth lies with the Internet of Things. In 2014 Qualcomm set up the AllSeen Alliance, a consortium to coordinate the development of an IoT communications standard.

Already Qualcomm is selling chips for such IoT uses as home appliances, wearable tech, and connected cars. But it's also working on "system-on-a-chip" technologies. And patent research and consulting firm LexInnova says Qualcomm has the most IoT patents of any company (Intel is second).

QCOM stock trades at about $54.50. But its estimated earnings for 2017 are $4.64, according to Yahoo! Finance. Given Qualcomm's price/earnings ratio of just over 17, its price target calculates to about $80. And Qualcomm is a top dividend payer, with a yield of 3.86%.

NVIDIA is focusing its IoT efforts on the connected car. It makes sense, as NVIDIA already has been pushing to get its Tegra chips in autos, which have become much more computerized over the past decade (even without driverless tech).

The company's Jetson TK1 development kit is intended primarily for smartcars, although the platform can also be adapted for other IoT applications, such as home appliances. NVIDIA already has 50 automakers and startups using its Drive PX platform for driverless cars.

Texas Instruments is the third-largest chipmaker on the planet. Like the other large semiconductor producers, it has a range of products but is seeking to exploit the Internet of Things.

TI's opportunity is with its SimpleLink line of low-power wireless chips, which will prove vital to linking IoT devices to the cloud and broader Internet. Texas Instruments has also partnered with International Business Machines Corp. (NYSE: IBM) and ARM Holdings Plc. (Nasdaq: ARMH) to create an IoT operating system, and with Microsoft to build kits designed to help developers connect to Microsoft's Azure cloud platform.

Here at Money Morning we like Intel stock so much we recently made it a Pick of the Week.  INTC stock has multiple catalysts, and the Internet of Things is one of its most promising. Back in 2014, the company came out with Quark, a small, low-cost "system-on-a-chip" as well as Edison, essentially a Quark-based computer that fits on an SD card. Both are ideal for IoT applications.

And Intel isn't just focused on hardware. Its Galileo developer kit is aimed at helping people create IoT software. The company also offers a platform to connect data from IoT devices to the cloud. Intel's ability to offer an "end-to-end" solution will appeal to a lot of business customers.

Overall the company's revenue and earnings have been stagnant. But over the next few years its investments in IoT products should pay off. That makes SLAB stock a high-risk, high-reward play.

More Great Tech Stocks to Buy: The stock market has had an erratic year and will probably remain volatile for the rest of 2016. For investors who want to stay in the market, that can make for some tough decisions. That's why Money Morning Director of Technology & Venture Capital Michal A. Robinson likes tech stocks in times like these. And he's found three that he believes will double over the next four years...

Finally! You got off the Internet of Everything (which just isn't) and properly call it the Internet of Things (IoT), which is. Congrats, and don't forget to mention it to Bill Patalon.