Most American consumers do their banking with one or more of the 10 biggest U.S. banks, like Bank of America Corp. (NYSE: BAC) or Wells Fargo & Co. (NYSE: WFC), with more than $10 trillion in assets.

In any case, it's safe to say few, if any, Americans bank with Raiffeisenbank Gmund am Tegernsee, a small co-operative bank outside Munich, Germany.

But now it's vital Americans know what's happening in the tiny bank with the big name. The European Central Bank's negative rate on deposits has forced the small co-op to implement negative interest rates (what it creatively calls a "custodian charge") of its own… on private clients.

Yes, while the majors like JPMorgan Chase & Co. (NYSE: JPM), HSBC Holdings Plc. (NYSE: HSBC), and ABN Amro Group NV (AMS: ABN) have been moving toward negative deposit rates for their business clients for some time, this is a shocking and, unfortunately, early example of private citizens having to pony up for central bank madness.

It's not hard to fathom that soon enough, this will affect more and more people in more countries at different income levels. As I've said, the consequences of negative-interest-rate policies – financial repression – are soon to be widely felt.

That's why some of the world's ultimate "in the know" investors are making a beeline for gold right now.

And when you see what's coming down on our heads, you'll see why it's a good idea to follow them before prices get much higher…

There Are Helicopters Over Tokyo

In politics and finance, history has a tendency to repeat. That's why I look for parallels between present and past.

Otto von Bismarck, the "Iron Chancellor" who is credited with unifying several independent states into the single nation of Germany, reportedly once said: "Never believe anything until it's officially denied."

Considering that Bismarck was also the first to introduce the modern welfare state with national healthcare, accident insurance, and old-age pensions, that statement carries plenty of weight.

A recent case in point is Japan – a country at the absolute bleeding edge of financial repression.

Back in October 2014, the country's top central banker (and contender for "Top Denier"), Haruhiko Kuroda, surprised observers as he added stimulus measures… just a few short days after he made comments that he anticipated "improving inflation."

This past January, Kuroda dismissed outright the idea of implementing a negative-interest-rate policy.

Yet only one week later, he announced its introduction. The fallout triggered shockwaves – shockwaves that proved to be a tremendous catalyst for gold prices. That's no accident. 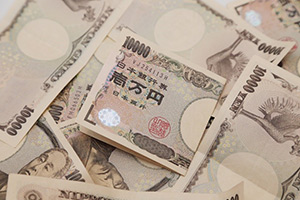 Since Kuroda announced Japan's negative rate policy, gold is up an astounding 22%. In the first half of 2016, gold was up 25%, the largest such advance since 1980, making it one of the best-performing assets.

And that brings us to his latest denial. His recent rejection of the idea of helicopter money, against a backdrop of anemic growth and falling prices, is far from convincing.

What's more, none other than former Federal Reserve Chair Ben Bernanke has taken his helicopter act to Tokyo recently. Apparently Bernanke, after doing such a great job guiding the U.S. financial system through the 2008-2009 crisis, has now taken to proffering his brilliant advice internationally.

So what's "Helicopter Ben" up to now?

Apparently, he's proposed innovative forms helicopter money, like "perpetual bonds" with no maturity. That's right. These bonds would pay no interest, either. And because they essentially never have to be repaid, they're the perfect excuse for the central bank to print money – money that comes with no interest or principal. 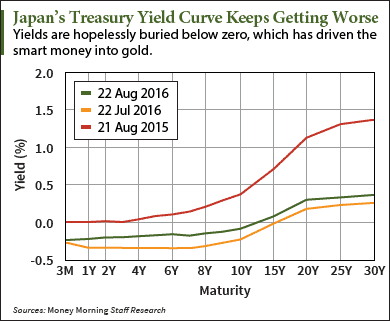 Theoretically, the Bank of Japan could buy these bonds outright, pumping liquidity into the financial system. And then the monkey-see, monkey-do central bankers of the United States and Europe, who've never let an opportunity for money-printing pass them by, would do the same.

If this is sounding misleading, convoluted, and underhanded, that's because it is.

But if it sounds improbable… not so fast:

Koichi Hamada, an adviser to Japanese Prime Minister Abe and another "official denier," told Bloomberg that helicopter money had not been discussed during Bernanke's June visit and even said there was "no chance" Japan would introduce helicopter money anytime soon.

Investors Have to Add to Their Gold Holdings Now

Some 30% of sovereign bonds globally now yield negative returns, and businesses and individuals are being charged to leave their money in the bank, so they've little alternative but to look elsewhere.

Now, one of the biggest arguments against gold is that it has no yield.

My answer to that is: neither does cash. And unless there's deflation, cash is unlikely to gain value. Gold, on the other hand, has theoretically unlimited upside.

When comparing gold to sovereign bonds and now cash deposits as well, both of which have carrying costs, the reasons not to own gold become a whole lot weaker.

Put simply, gold is a safe haven that's returned to its secular bull market after a four-year correction.

And now some of the most highly connected and influential investors anywhere are reaching the same conclusion.

In just the last month, TD Asset Management's chief investment officer, Bruce Cooper, has transitioned to "maximum overweight" in gold for the bank's $300 billion of assets under management.

And even the ultimate insider Jacob Rothschild, member of the famous "blood in the streets" Rothschild banking family and chairman of London-based RIT Capital Partners, told shareholders in a recent letter:

"…We are therefore in uncharted waters and it is impossible to predict the unintended consequences of very low interest rates, with some 30% of global government debt at negative yields, combined with quantitative easing on a massive scale…"

Rothschild said he expected Brexit fallout, the upcoming U.S. presidential election, turmoil in the Middle East, and slowing Chinese growth to continue being supportive of gold.

So the conclusion is quite clear. The conditions that favor higher gold prices are not abating, they're intensifying.

What's more, we could hear all sorts of "ideas" out of the Fed's big annual Jackson Hole Symposium later this week. If history is any guide (and it is), any or all of them could send gold skyrocketing.

If you don't already own some gold, it's not too late. This may be your last chance to buy gold at what will turn out to be bargain levels.

Here's Another Must-Have Hard Asset: Like gold, diamonds are a great "security" play for economic uncertainty. Trouble is, they've always been more complicated to value and trade than gold… until now. Click here for Michael Lewitt's favorite diamond play, including recommendations for accredited and non-accredited investors. You'll also get his Sure Money delivered at no charge, twice each week.

Central Banks policy is adopting montary expansion measures (QE) the impact of which has seen artificially low interest rates. The asute chinese are accumulating gold like no tommorow so perhaps the future will be a gold backed yuan to compete with the $ as THE RESERVE CURRENCY. As negative interest rates kick in and yields fall lower, accumulating gold as a hedge against inflation or defaltion may be just the answer as the chinese would say, 'We live interesting times'.

Gold has dropped significantly again to day. For Goverments to survive today with their borrowing and pandering policies, requires close to or equal to zero interest rates, ability to monetize their debt (to our disadvantage), keep stock and bond markets elevated and have a pacified populace. Hence they need a stable price in gold. Since they control all the levers of monetary power, THEY WILL HAVE IT. You need to think about having a new career plan as an advisor/analyst. D. B.

Your timing is perfect! Sorry man – happens to us all at one time or another.