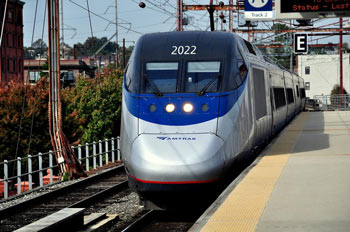 Amtrak train on the Northeast Corridor.

U.S. Vice President Joe Biden announced on Friday the largest-ever loan doled out by the Department of Transportation (DOT).

A whopping $2.45 billion of your taxpayer dollars have been earmarked to aid Amtrak. The Amtrak loan will provide an upgrade to its Northeast Corridor.

"You can't make this country work without rail... This is a really, really sound investment," Biden said about the agreement, according to The Washington Post on Aug. 26.

We question the "soundness" of that investment...

Amtrak Has Been a Waste of Money for Decades

In 1970, Congress created Amtrak and tasked it with running a passenger rail service. As a government-owned corporation, Amtrak was expected to generate enough revenue to cover its own costs.

But since its inception over 40 years ago, Uncle Sam has propped up the railway to the tune of about $1 billion a year.

You see, in the 1980s, airline deregulation happened, which created more competition and lower ticket prices, leaving passenger rail service in the dust.

The federal government continued to subsidize Amtrak. The train company is not fiscally self-sufficient as a standalone as was originally intended.

Don't Miss: The real reason our "do nothing" Congress gets absolutely nothing done...

What Uncle Sam should be doing is looking for better alternatives to using tax dollars to keep its failing train company afloat...

Why Amtrak's Current Model Won't Work - Even with a $2.45B Taxpayer Loan

Instead of wasting more tax dollars, the railway could alternatively undergo an airline-like privatization reformation. The money from this reconfiguration could then be used to garner the funds to keep Amtrak alive.

Such a reformation would have to address improvements on all routes at Amtrak, however - not just the Northeast Corridor route, which is the current focus...

That's because the Northeast Corridor actually generates operating surpluses year to year, which explains why the government narrowed its lending focus to just that area - to keep its most lucrative part of the business churning out the greenbacks. The Northeast Corridor posted a $447 million profit in FY 2015.

For example, the "Empire Builder" route, which runs from Chicago to Seattle, runs at an annual operating loss of over $10 million. The same goes for...

Altogether, long-distance Amtrak routes account for about 15% of Amtrak passengers, but 41% of costs.

This causes the railway to post some massive annual losses as a whole every year. Have a look. 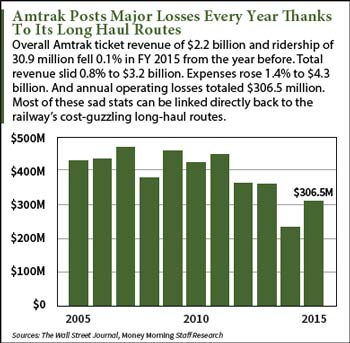 So it's obvious that something must be done about these profit-eating long-haul routes. However, with all the attention and money going to the Northeast Corridor, it's difficult to see how such necessary improvements could ever be made.

Both Amtrak and the government have a trick up their sleeves when it comes to addressing that particular problem. And they don't want taxpayers to know about it...

You see, Congress has been weighing legislation this year that includes a provision to let Amtrak use the Northeast Corridor's surpluses to help finance other major Amtrak projects (read: the long-haul routes).

But Amtrak is supposed to be using that surplus cash now to pay back its massive $2 billion dollar loan to taxpayers like you.

Interestingly enough, after VP Biden's big announcement last Friday, the precise terms of the Amtrak loan were not made available. According to WaPo, however, representatives for the railway have allegedly promised the company would indeed use the extra money generated by the Northeast Corridor to pay back American taxpayers.

We'll see about that.

Up Next: When the robber barons spent their millions on buying a president of their very own...

The airline industry was deregulated in 1978 and not the 1980's. You sound like you are giving Reagan the credit for the deregulation. He had nothing to do with it.