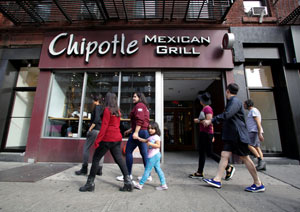 Before we get into our outlook on Chipotle Mexican Grill Inc. (NYSE: CMG) stock, here's everything investors need to know about today's news and the soaring CMG stock price...

After Tuesday's close, Ackman disclosed he had taken a 9.9% stake in Chipotle.

Ackman's stake was worth about $1.2 billion as of yesterday's close. The position makes Ackman's Pershing Square Capital Management LP the second-largest holder of Chipotle stock.

In a filing, Pershing Square said it believes the stock has a strong brand and an enormous growth opportunity. Ackman's firm also believes strongly in Chipotle's leadership.

The news was welcomed by Chipotle officials, as confidence in Chipotle and its brand have been waning since 2015.

Related: This penny stock could bring triple-digit gains - and save a dying industry at the same time. Click here to learn more...

A string of food-safety problems, including cases of salmonella, E. coli, and norovirus in several states, have sent the Chipotle stock price tanking more than 42% since last summer. The company also received a grand-jury subpoena seeking information about the series of food-safety issues.

Those issues scared customers away in droves. According to a Morgan Stanley survey, about 25% of the chain's once dependable customers have stopped going or aren't going as frequently.

In attempts to bring customers back, Chipotle has been giving away items and offering free kids' meals. It also launched a loyalty program that rewards customers based on dollars spent or number of visits.

But it could take several quarters for the true impact of these promotions to be seen.

Today's news from Pershing Square has been a short-term catalyst for the Chipotle stock price, but we view it as nothing more. Here's why we're not buying the hype from today's news...

Why We're Still Bearish on the Chipotle Stock Price Today

Money Morning has been bearish on Chipotle for more than a year and we maintain that stance.

While Pershing Square and Bill Ackman carry considerable clout, the hedge fund has seriously underperformed this year. In fact, their portfolio plunged 40% year over year through August, marking the worst stretch of returns in the fund's 12-year history. In comparison, the S&P 500 advanced 3.2% over the same period.

Urgent: This Biotech Stock Could Double Your Money from Here...

In the first six months of 2016, investors withdrew roughly $600 million out of Ackman's fund. That's about 5% of the money Pershing Square manages.

Despite the recent failures, Ackman will push for changes at Chipotle.

Ackman could shake up Chipotle's board and rein in compensation. He could bring in a whole new team to overhaul operations in the front and back of the house. A greater focus could be placed on margins. He could also limit expansion, including Chipotle's plan to debut a burger chain this fall called Tasty Made.

But those are not reasons to buy in on the rising Chipotle stock price today.

Morgan Stanley analayst John Glass wrote in an investor note today that there is "no quick fix" for Chipotle. That's a message we've been telling Money Morning readers all year.

Plus, the overall restaurant sector has entered a recession. Consumers are taking advantage of lower-priced groceries and eating more meals at home.

Howard Penney, a Hedgeye restaurant analyst and Chipotle short, said Tuesday the Chipotle stock price could fall another 50%. Penney said Chipotle is not in the position to raise prices right now and that it will be difficult for the company to cut its costs.

The only thing real thing that will bring a meaningful boost to the Chipotle stock price is sales growth. And that number has been trending in the wrong direction this year.