In fact, Clinton outspent Trump by a factor of 2:1. 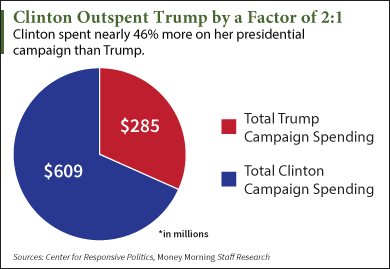 Donald Trump's cost-effective victory stunned political analysts and pollsters, and has overturned prevailing notions that money in American politics guarantees a better chance of winning an office. Trump proved that a lean campaign that leverages media exposure can be a winning campaign model.

To be fair, it would be tough to repeat Trump's performance, according to Reuters. Trump's celebrity status, household name, and aura of controversy all attracted nonstop coverage from the mainstream media, boosting his message (even if some of that coverage had a negative slant).

According to an analysis by the data analytics firm mediaQuant, Trump generated nearly $5 billion worth of free media coverage during the election. That figure was more than twice the amount garnered by Clinton.

True to one of his mottos, Trump ran his campaign "under budget" and got exceptional results.

Don't Miss: We know that Donald Trump recieved billions worth of free media coverage during the election. But here's a further breakdown of Trump's free-media strategy…