It was just two days before the Thanksgiving holiday when 40-year-old Alina Simone, a Brooklyn, N.Y., musician and writer, received a frantic phone call.

It was her mother, and she was being "held hostage." Digitally speaking...

With panic in her voice, Simone's mother read the stark message displayed on her computer screen.

"Your files are encrypted," the message stated. "To get the key to decrypt files you have to pay $500. If you fail to pay within a week, the price will go up to $1,000. After that, your decryption key will be destroyed and any chance of accessing your files - all of your data - will be lost forever."

The message was signed "Sincerely, CryptoWall."

More than 5,000 files - irreplaceable family photos, critical work documents, life-sustaining bank statements, and other sensitive information - were now in the hands of cyberthieves.

Hysterical, and uncertain what to do, the Simones capitulated and paid their captors nearly $600.

Welcome to the new digital horror known as ransomware - a cyberthreat so colossal that security specialists are now classifying it as an "epidemic."

And I can prove it.

Better yet, I can show you how you can turn the tables, protect yourself, and then cash in big on this new threat - immediately

But before I show you how to do that, let's take a closer look at how ransomware has grown to epic proportions.

They're Calling This the "Hackerpocalypse"

I've been talking about the hacking threat facing the United States with my paid-up subscribers since the very launch of Private Briefing.

Three years ago, I told them that Russia was using Ukraine as a "hacking testing ground" - and would be turning its cyber weapons on the United States very soon.

I was right on both counts.

Since I made those predictions, we've all read how China has swiped the specs for all the top U.S. weapons systems. And right now - even as we talk here - American news organizations are detailing Russia's alleged efforts to hijack the U.S. election. 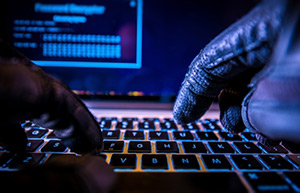 I'm recounting these predictions not to boast (well, okay, maybe a little), but rather to build credibility so that you'll also take seriously my warning that the ransomware threat is going to escalate mightily in 2017.

In concept, ransomware is deceptively simple - in essence, a form of "digital extortion."

After tricking the victim into clicking on an innocent-looking (but stealthily malicious) link or attachment, the ransomware software encrypts files and displays a message with instructions on how to recover them.

As we saw with the Simones, recovery of those files is almost always predicated on a payoff - in dollars, or, more often, in Bitcoin.

But it's not just families being targeted.

And where is the FBI in all this? Oh, that's right, they're busy spying on innocent citizens.

That takes a lot of time and resources, don't cha know, which leaves little of both for actually tracking down criminals.

Fallingman — You always add something to our discussions here. As you know, we focus on the finance, economic and investment sides of the "stories" we cover. But your question is a good one … as usual.

Good to hear from you…