Gold price news this past week has mostly revolved around the White House as we gradually move into the Trump administration's tenure.

January alone was even more impressive, with the gold price gaining 4.9% that month. I'd caution anyone to expect that pace of gain to continue through the rest of this year. But the common saying is "as goes January, so goes the year." And January clearly marked the start of a long-term rally in 2017.

On the sentiment side, we have more encouraging news. The World Gold Council just reported that gold-backed ETFs increased their holdings by 1% last month. And one of the world's greatest investors moved back into gold in late December and January, just as gold prices bottomed.

This investor has long held huge influence over the gold market, and his moves could have a big influence on gold prices in 2017.

First, here's why gold is enjoying another weekly gain...

Gold Price News: Futures on Track for a 1.3% Gain This Week

On Tuesday, gold prices started to consolidate after the two previous strong daily gains. Gold tumbled 1.1% lower from the last closing price to settle at $1,233 on the day.

Here's how that looked... 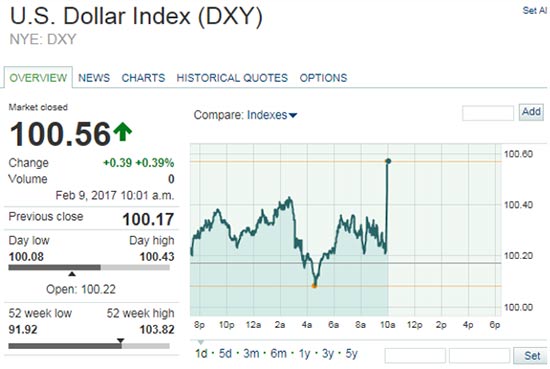 As the dollar gained throughout the day, the gold price remained weak. It eventually closed at $1,237 for a 0.3% loss on the day.

A second consecutive weekly gain for the gold price is a healthy indicator of a long-term rally. But I've also identified three fundamental indicators that point to higher prices in 2017.

Here are those three indicators - one of which involves one of the most famous investors ever...