The big silver price news of 2017 so far has been its surprising outperformance of gold.

And in the month of January alone, the price of silver was up 6.5%. That again handily beat gold's 4.7% return.

I've been saying that silver is looking good technically and is the better bargain of the two metals. With some luck, the outperformance we've seen of late will continue going forward.

Silver's technical setup is very favorable from several perspectives. We'll explore how two of the most important technical indicators - the 200-day moving average and gold/silver ratio - support our bullish silver price target by the end of 2017.

But first, let's look at how it's done over the past trading week...

For the most part, silver prices are coming off a strong week. 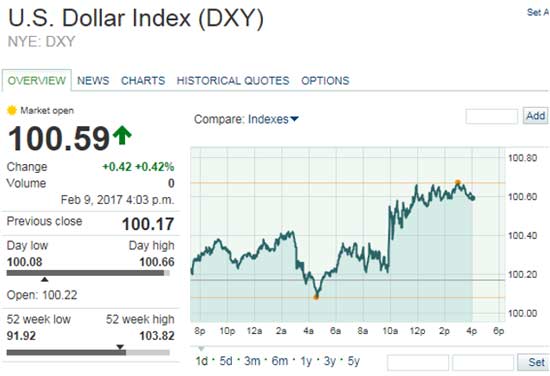 Despite any future movements in the dollar, we're bullish on silver prices in 2017. That's because the 200-day moving average and gold/silver ratio have been acting in a way that points to a continued rally this year.

I am a novice in the world of precious metals (particularly silver). I am still trying to be clear on should I get into silver etfs or actually stack-able rounds and/or coins. I would appreciate any and all input and comments on this and related subjects!!

The town of Cobalt in Ontario could BOOM again. Silver capital of Canada.

Thanks for the very positive and perceptive view of my favorite investment.
Do you think that the present action of Ag and Au are essentially a repeat of the 70's? It's taking a bit longer, but it seems to me that the two time periods are a
pretty good match in terms of the general economic landscape. The main difference to me seems to be the stagflation vs. no growth. The stock market situation was different though.