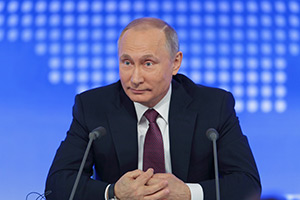 Russian President Vladimir Putin's net worth could make him the richest man in the world.

Last Wednesday (Feb. 15), International Business Times reported the president of the former USSR could have a fortune worth some $200 billion.

At least according to the outlet's source - Russian fund manager and author Bill Browder.

Browder's $200 billion estimate would make Putin the wealthiest person on the planet, according to the premier chronicler of the planet's "most wealthy" list standards: Forbes magazine.

The current "Wealthiest Person in the World," according to Forbes' latest calculations (revealed Feb. 18), is Microsoft Corp. (Nasdaq: MSFT) founder Bill Gates, whose net worth clocks in at $75 billion. That's a lot of money for the renowned creator of the Microsoft dynasty, but still a noticeable $125 billion less than what Putin purportedly holds.

And there are two specific reasons why the Russian president has never made Forbes' list...

The first reason has to do with Browder's estimated $200 billion.

Despite his best guess on Putin's net worth, it's just that: a guess.

You see, no one actually knows how much the Russian president - a former KGB agent - is actually worth.

And that's because the Kremlin doesn't want anyone to know.

The most often cited estimate of Putin's net worth before Browder came along was from a mid-level Kremlin adviser in 2012...