As investors continue to try and size up markets, they're continuing to flock to gold. This has pushed the price of gold in 2017 up 9.2% to $1,260 since the start of the year.

And that's happened in the face of factors that would normally act as headwinds for gold prices.

The U.S. dollar has been regaining some strength, and the Fed's been touting more interest rate hikes in 2017. Both of these items would normally be weighing on the gold price, as a stronger dollar competes with the metals and higher rates should make short-term Treasury bonds more attractive.

But what we've been witnessing instead is a gold price that has moved in a tight consolidation between $1,220 and $1,240 over the past two weeks.

Editor's Note: A door has opened for an ultra-rare but powerful anomaly in the stock market... It involves a precious metal, one that's considered exceedingly more rare than gold. Get all the details.

An even bigger gold anomaly is its gain in the face of a surging Dow Jones Industrial Average. Historically, the first year of a presidential term is typically challenging for stock markets. This may not be the case for Trump if he stimulates the economy through infrastructure spending and tax cuts as promised.

Considering gold has already done that this past week, we're confident that will continue...

Why Gold Prices Are Up 2.1% This Week

The Dow Jones has closed at record highs for 10 consecutive sessions. While you'd think that'd send investors out of gold and into the markets, gold prices are still on track for a weekly gain of 2.1%.

Tuesday brought out the sellers in gold as they anticipated the release of the January FOMC minutes. That spurred strength in the U.S. Dollar Index (DXY), which touched 101.5 early in the day. The surge in the dollar dragged the price of gold down to $1,230 at the open. But the DXY eased up a little and let gold regain some of its losses. The metal settled at $1,235 for a slight 0.2% loss.

Here's the action in the DXY over the past five trading days... 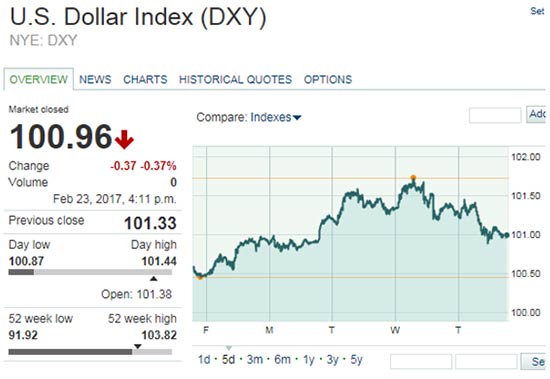 On Wednesday, Feb. 22, gold prices dipped to $1,232 by midday as traders reacted to the Fed saying it would raise rates sooner than later. The dollar popped to about 101.7, but the initial reaction was short-lived. The DXY retreated to about 101.2, and the gold price gained 0.2% to $1,237.

But the price of gold saw its biggest gain on Thursday after the U.S. government released initial weekly jobless claims numbers. Despite being close to forecasts, the DXY dropped in early morning trading from around 101.35 to 101. This decreased the probability of a Fed rate hike in March to 22%. Gold prices jumped 1.1% to close the day at $1,251.

And I see gold hitting a very high price target in 2017 - no matter what happens with Trump and the stock market.

Peter , you mentioned Nippon Dragon Resources in Late 2015 as being very promising. This is now early 2017 . Do you still feel this company deserves consideration?