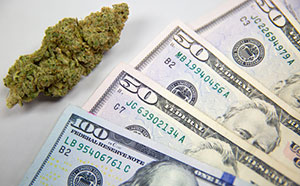 The marijuana industry in North America is projected to skyrocket from $6.7 billion in sales from 2016 to over $20 billion by 2020.

That's an increase of nearly 200% in just four years.

And because this is one of the best long-term growth industries for retail investors, we provide Money Morning readers the top marijuana stocks to watch each week.

The first pot stock on our radar for the week of Feb. 27 is Newgen Concepts Inc. (OTCMKTS: VPOR).

As you can see in the video below, the Easy Grinder has an unveiling appeal similar to a new Apple Inc. (Nasdaq: AAPL) product.

And according to Newgen Concepts, the consumer response for the initial product run of Easy Grinder has been overwhelming...

In its initial run, the company planned to produce 20,000 units and generate $1 million in sales. But according to MMJReporter.com, the product is already sold out.

The first marketing strategy was the creation of its video, showing the product being used. The company released the video on Feb. 14, and it has over 32,000 views as of Feb. 27.

The second marketing strategy was to promote the Easy Grinder at trade shows.

Newgen reportedly accepted retail pre-orders for the Easy Grinder at Champs, as well as the other trade shows it attended.

While the demand for Easy Grinder is impressive, Newgen is not the only marijuana stock on our radar this week...

That's because this next pot stock to watch could climb nearly 170% in the next year after a recent pullback in its stock price...

One of the Top Marijuana Stocks to Watch Now

I love your newsletter. I'm new to stocks and marijuana stocks make the most sense to me.
I think I sent this thought before but if Trump upends Recreational Marijuana, the world's drug cartels will be thrilled to take over.
It will also rob the legal states and the Federal Government of major needed tax revenue. At this point I think it would be a foolish move.
Thanks for all your good information, Sincerely, Janice Carter

The Editor
Reply to  Janice Carter

Thanks for getting in touch! We’re glad you’re with us, and we’re thrilled that you’re thinking about trading our recommendations. We’ve got lots of complimentary high-profit research available for folks who are just starting out.

We invite you to check out some of our beginner’s articles, like this one about small-cap risk management by our Small-Cap Specialist, Sid Riggs: https://moneymorning.com/2014/03/26/seize-massive-wins-without-losing-sleep/

Once again, thanks for joining us. Let us know when you get your first big gain – or if you need anything at all. – The Editor

I'm looking to get started in buying marijuana stocks….even penny stocks..Just enough to get started feeling around in the market. Any suggestions on how to do that without committing to a lot of money?

Dolly, do you have a brokerage account? If not open one and put some money into the account. I use TD Ameritrade and love them. They charge just around $6.95 for each stock order, a buy or sale. So you could buy, lets say the above Newgen Concepts, you use the symbol VPOR and you could get 10,000 shares for $48 plus the $6.95.

I have 31 Marijuana stocks to date. I just got another double today on SING. I bought 10,000 at .042 and sold 5,000 for .095. That's makes 9 stocks that have made profit and still have great FREE positions in. "The Road To Marijuana Millionaires" is one of the best reads out right now.

I hope that things will blow over and get back to normal, for all involved.