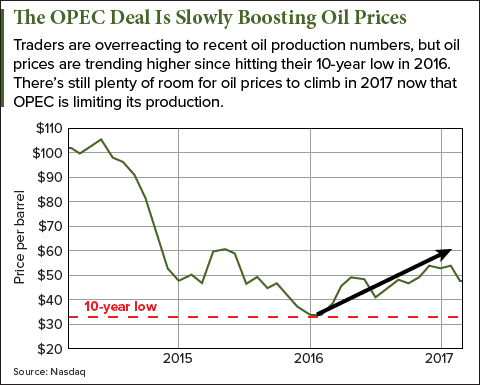 That means savvy oil investors can ride the resurgence of American oil to double-digit profits this year. And that's why you shouldn't worry about a temporary dip in oil prices...

The only problem for the deal is non-OPEC members, like Russia, who have lagged behind with a compliance rate of only 64% last month. But Russia also announced on Friday that it will reach 100% compliance - an oil production cut of 300,000 barrels a day - by the end of April.

And that also means you can book double-digit profits by knowing how to invest in American oil. As promised, we're giving you our complete breakdown of how to profit from oil in 2017. That includes our top two picks, with projected gains of 25% or higher...