Virtual reality technology is rapidly advancing, allowing doctors to practice surgeries and teens to simulate driving before getting their license.

However, there's a company that plans to change that. And investors are lining up to get in on the action, investing $100 million in the last funding round. 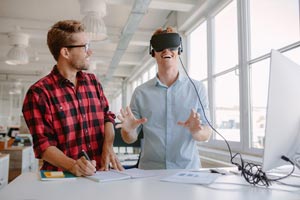 "By syncing the physical body in all its expressive capacity with a digital avatar, MASK allows developers to build playable characters that emote in pre-real-time," MindMaze said on its website.

According to TechnologyReview.com, MASK recognizes 10 different expressions, some of which include smirking, grimacing, and eyebrow-raising.

New technology like this is at the center of the next big trend that Money Morning Director of Tech & Venture Capital Research Michael A. Robinson is calling Neural Imprinting.

In Robinson's 35-year career, he's been a board member of a venture capital firm and an advisor for two more.

And he's been watching this trend closely, as some of the most influential companies and investors are rushing to fund this exciting new technology.

By 2020, Robinson believes just one major factor in this Neural Imprinting trend could create $2.86 trillion in new wealth.

Here's how you can take part…

And because this one tiny company in Silicon Valley has 7,300 patents for a key component behind this technology, every major player in tech is beating down its doors.

To make things even better, this company has been selected to take part in a $425 million project with the U.S. Department of Energy.

Of course, like any investment, there are risks involved.

That's why Robinson has thoroughly vetted the opportunity and would like to tell you everything you need to know about this company.

But before Robinson's full presentation, we want to make sure Money Morning readers know more about our Director of Tech & Venture Capital Research and his many accomplishments.

Who Is Tech Guru Michael A. Robinson?

Michael is one of our most prominent and respected investing "gurus" here at Money Map Press – and for good reason. He is one of the top financial analysts working today. Make no mistake: Michael's ideas are completely his own. He's a true original. He works solely for Money Map Press… and receives absolutely no compensation from companies he writes about.

His book "Overdrawn: The Bailout of American Savings" was a prescient look at the anatomy of the nation's S&L crisis, long before the word "bailout" became part of our daily lexicon. He's a Pulitzer Prize-nominated writer and reporter, lauded by the Columbia Journalism Review for his aggressive style.

And today, we're excited to share his thoroughly vetted opportunity.

You can see the full presentation, right here.

New Technology Could Create $2.86 Trillion in Wealth: The revenue growth is shocking. Last year, with a very limited release, it generated $70 million in revenue. This year, it's on track for $684 million. But over the next three years, the core technology could create $2.86 trillion in new American wealth. And this isn't just for the billionaires of the world. Many everyday Americans could become millionaires as well. Click here to see how you could be one of them…