While the marijuana industry appears to be skyrocketing in North America with $6.7 billion in sales in 2016, its growth could actually be much higher. 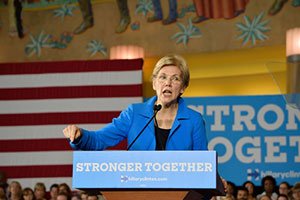 That's because the biggest obstacle for legal marijuana businesses is a lack of access to capital.

Warren is spearheading an effort to make it easier for financial service providers to work with marijuana companies nationwide.

And she's leading the charge for three reasons…

The first is marijuana has been shown to reduce chronic nerve pain, according to a study by a Canadian research team in 2010. And through prescribing patients marijuana, the amount of deaths from the opioid crisis across America could potentially be reduced.

According to The Chicago Tribune, there were more than 50,000 deaths in the United States from drug overdoses in 2015. Deaths from synthetic opioids totaled 9,580 in 2015, and deaths from abusing painkillers totaled 17,536.

In a Feb. 9 letter to Dr. Thomas Frieden of the Centers for Disease Control and Prevention, Warren asked for the CDC to look into the impact of marijuana legalization on opioid overdose deaths.

"Additionally, I hope that the CDC continues to explore every opportunity and tool available to work with states and other federal agencies on ways to tackle the opioid epidemic and collect information about alternative pain relief options," Warren said in the Feb. 9 letter.

Trending: First Marijuana ETF Hits the Market – Should You Buy?

The second reason is Warren believes a cash-only business is a target for criminals. According to The Denver Post, the senator said removing the cash-only barrier for cannabis businesses would make sure companies are really paying their taxes and that money isn't being diverted to criminal enterprises.

And the final reason is the Massachusetts senator's state voted for legalization in November 2016.

This will cause an economic boom in that state that will create jobs and make millions in taxes.

Marijuana legalization in Massachusetts is expected to generate $900 million in revenue by 2020 from recreational sales, according to The Boston Globe. And with medical marijuana sales, the revenue could reach over $1 billion.

And Massachusetts stands to generate millions from fees and taxes.

For example, when marijuana sales reached $996 million in Colorado in 2015, the state collected $135 million in taxes and fees.

This kind of revenue is creating a "gold rush" for entrepreneurs and local economies.

However, retail investors are also plotting their seven-figure weed windfall with the top pot stocks from every ecosystem – growers, edibles, dispensaries, and more.

And here's how you can legally profit from cannabis…

The Best Way to Profit from the $6.7 Billion Marijuana Industry