Hiking drug prices has become an easy way for big pharma companies to score quick, massive profits. For example, Mylan NV (Nasdaq: MYL) increased the cost of its life-saving injectable allergy medication EpiPen by 540%, from $100 to $640, in just one year.

But health insurance companies are just as bad as big pharma - if not worse. 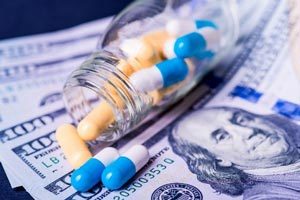 You see, health insurance companies are using an obscure "tiering" system to take advantage of millions of Americans...

What Is a "Tiering" System?

Most insurance plans include a drug formulary - a list of prescription drugs used by practitioners to identify which drugs offer the "greatest overall value." Sorting the drugs in this manner is designed to keep costs low for both the consumer and the insurance company. The tier that your medication falls in determines the cost of the drug to consumers.

However, according to Arise Health Plan, a large insurance agency in Wisconsin, the greatest overall value has absolutely nothing to do with the effectiveness of or need for the drug. Instead, drugs are sorted into tiers based on cost-benefit studies.

Must Read: The Five Most Outrageous Drug Prices Increases of the Past Year

Cost-benefit studies are used to value both costs and potential outcomes in monetary terms. In other words, the insurance companies place the drugs into tiers based on how much money it will cost them to provide the drug relative to how likely you are to benefit from it -- and not by how many people may need that drug to stay alive.

That means a medication may be placed in a higher tier - meaning you foot a larger portion of the bill - if it is new or if there is a similar drug on a lower tier that may provide you with the same benefit. However, the "same benefit" may not be true for people with allergies or other intolerances to the drugs their insurance companies cover.

"It's okay to tier but there has to be a way to have exceptions if that drug doesn't work for the patient," said David Mitchell, co-founder of Patients for Affordable Drugs, to NBC News on March 24. "Otherwise they're not putting patients first."

"The techniques used to value health outcomes in monetary terms remain somewhat controversial." That's a quote from a report by the World Health Organization back in 2003. Still, nothing has changed.

Currently, there are very few loopholes - if any - available to families who fall victim to the tiering system...

As Costs Skyrocket, Families Turn to the Black Market

"I have to beg, plead, and borrow just to survive each month."

Soaring drug prices and inflexible insurance policies are forcing American families to take desperate measures outside of the health system.

In fact, NBC News reported that many families are rushing to the black market - the dangerous venue where highly controlled substances or products such as drugs and firearms are illegally traded - to get the medicines they depend on cheaper than they would at the pharmacy.

Buying and selling prescription medications online is illegal. However, "I think for the people that self-pay, that are paying out of pocket, it's more common than we think," said Dr. Brian Berger to CBS News last year. "If you need to get medications and you can't afford it, people are going to try to get it in other ways. Some of those ways may be getting it off the street so to speak," Dr. Berger explained.

And even though this method of acquisition comes with high risks, like the chance of ingesting counterfeit medications, families are turning to the black market as their last resort.

"I have to beg, plead, and borrow just to survive each month," said Andrea Corley, the mother of a child who depends on a brand-name insulin that is not in their "tier" plan. "I will go without eating if I have to, to make sure she is healthy," said Andrea. And she has, with the family sometimes going without food or electricity to buy insulin off the black market, reported NBC News.

In addition to trading on the black market, many families are turning their backs to big pharma all together and rushing to herbal remedies, like medical marijuana, to treat their illnesses.

Want to Invest in Weed and Don't Know Where to Start? Well over half of the country already has marijuana legally available in some form. Eight states plus our nation's capital have made it completely legal to anyone over the age of 21. And the marijuana stock market is preparing to take off. Watch this short video and see whether jumping on this moon-bound stock rocket is right for you.