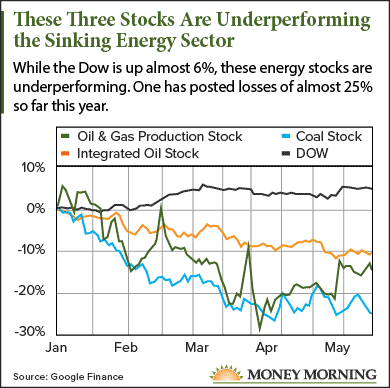 The energy stocks to short we're bringing you today are vastly underperforming the sector. These are also stocks that rely on higher oil prices to profit. Some oil stocks can profit in this $50 price environment, but the ones we're going to show you today are struggling. In fact, one of them is down 22% this year, compared to a 6% gain for the Dow in the same time.

To improve their bottom lines, these companies need oil and coal prices to climb. Oil prices are expected to rise, but not as high as these companies need. Money Morning Global Energy Strategist Dr. Kent Moors expects oil to be in the range of $56-$58 by September. That's a modest gain of 17% from today's price.

Coal, on the other hand, is expected to drop about 21% between now and 2019, according to World Bank data. The drop in price is due to countries reducing their dependence on coal-generated electricity.

Low oil prices are causing the first stock on our list to scramble to cut costs and try to become profitable...

Hess Corp. (NYSE: HES) has not been profitable since 2014, mostly due to crashing oil prices.

This year, Hess is expecting a pre-tax loss. The current estimate for losses in Q2 is $1.01 a share. Plus, the projected losses have increased over the last 60 days. Estimated losses were $0.81 per share two months ago. Just seven days ago, analysts expected quarterly losses to come in at $0.92 per share.

With the company expecting losses again this year, investor optimism should dissipate.

This next company has seen its revenue nearly cut in half in just two years with oil prices still below $50 a barrel...