In silver news today (Wednesday, May 10), prices are up 1% and trading at $16.23 per ounce. Today's gain marks a much-needed rebound for silver prices, which are coming off of seven straight sessions of losses and have hit 2017 lows each of the past four days. 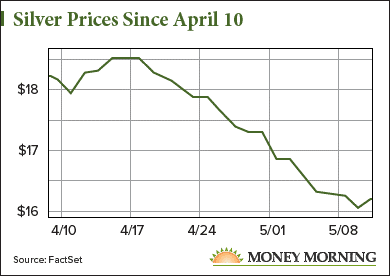 Silver headlines today have focused on President Donald Trump's sudden firing of FBI Director James Comey late yesterday. While the White House officially says it was over his mishandling of the Clinton email investigation, critics say it was really because of his role in the investigation into Russian ties to Trump aides. The news sent the Dow 74 points lower in morning trading and sent worried investors piling into silver as a hedging opportunity.

While much of today's silver price news focused on the Comey firing, we know the worsening relationship between North Korea and the United States is the biggest event to focus on right now.

Why the U.S.-North Korea Relationship Is the Real Silver News Today

Yesterday afternoon, North Korea's ambassador to the UK, Choe Il, told Sky News that his home nation is ready to conduct another nuclear weapons test. This would be North Korea's sixth test after having one each year in 2006, 2009, and 2013, as well as two in 2016.

The announcement was a warning, and show of strength, against the United States if the Trump administration decides to take the first action.

"The U.S. cannot attack us first," Choe Il said during the interview. "If the U.S. moves an inch, then we are ready to turn to ashes any available strategic assets of the U.S."

While there have been 50 years of hostility between the two countries, the tension has come to a head in 2017, thanks to repeated missile tests…

The first of 2017 came in February, when North Korea tested a long-range ballistic missile called the Pukguksong-2. Then in March, it launched four more missiles into the Sea of Japan. That caused alarm due to three of those four coming within 200 miles of Japan's shoreline.

The United States responded by sending the USS Carl Vinson naval strike group toward the Korean Peninsula on April 19. Since then, the North Korean media has called them "military provocations," which have included the United States conducting bomber drills with the South Korean military.

Now, the Trump administration is strongly considering military action against the country.

"There is a chance that we could end up having a major, major conflict with North Korea," Trump said during an April 27 Reuters interview. "We'd love to solve things diplomatically, but it's very difficult."

These types of war threats can push the price of silver higher. Investors typically purchase precious metals like silver and gold during conflicts because they're unsure how these events will affect the stock market. Silver's safe-haven qualities ensure the metal's value steadies or rises during these uncertain times.

Although the conflict should be adding pressure to U.S. markets and lifting silver, the metal has been dipping due to other factors. The biggest has been the Fed's hawkishness in 2017, which started with the March 15 rate hike. Since that date, the S&P 500 is up 1.4%, while the silver price is down 4.1%. That shows investors have been pulling their money out of less liquid investments, like metals, and moving into stocks.

But at the rate Trump and North Korean leader Kim Jong Un are making threats, the crisis appears to be heading in a violent direction. When that violence finally kicks into high gear, investors will surely pile back into silver as the conflict continues to unfold.

While the North Korea situation is the biggest silver news, it's just one reason we're bullish on the silver price in 2017. Here's just how high we expect the metal to rise this year…