The first Snapchat quarterly report was released last night (Wednesday, May 10), and it was far worse than analysts expected. Now, retail investors are suffering huge losses, with SNAP stock down 23% before the open this morning. 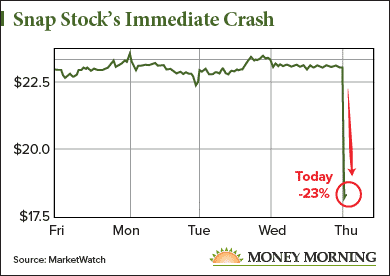 You see, Wall Street underwriters make millions from new stocks like SNAP by hyping them up to the public, even when they know it won't be a good investment. Since they're the sole distributors of the new shares to investors, they can make exorbitant underwriting fees. The two lead underwriters on the Snap IPO made a combined $46.8 million.

Plus, the underwriters and institutional investors on Wall Street were able to purchase Snap shares at the IPO price of $17. But retail investors had to wait until SNAP stock debuted at $24 to buy in. After shares of Snap Inc. (NYSE: SNAP) dropped 23.2% to $17.67 after Q1 earnings were announced yesterday, retail investors who bought in at the open are looking at losses of 26%. The underwriters are still up 3.9% from the price they bought in at.

Today, we're going to show you why you should never invest in IPOs.

First, here's why the Snapchat Q1 earnings report was so dismal...

Why the Snapchat Quarterly Report Was a Disaster

Trending: The Top 7 IPOs to Watch This Month

A big reason the company lost a gigantic $2.21 billion was the Snap IPO itself. Despite being the third-biggest tech IPO since 2012, it forced the firm to pay billions to employees whose stock options vested when the firm went public.

"Buying shares in SNAP is like trying to pick up nickels in front of buses."

In other words, Snap had to pay $2 billion of its own money to employees the day of the Snap IPO. Those payments accounted for $2 billion of the $2.21 billion loss during the first quarter.

But even if you don't account for that one-time IPO-related loss, Snap still lost more money than analysts expected. If you look at earnings before interest, tax, depreciation, and amortization (EBITDA) - which excludes IPO-related costs - Snap still lost $188.2 million in Q1. That was worse than the projected $180.7 million loss.

After the earnings, Money Morning Capital Wave Strategist Shah Gilani said Snapchat will continue to be horrible for investors. He says the messaging app will keep facing fierce competition from Facebook Inc. (Nasdaq: FB), whose market cap is 20 times the size of Snap's and has already started replicating many of Snapchat's most popular features.

"The thought that any sane investor would buy Snapchat is frightening," Shah said. "Buying shares in SNAP is like trying to pick up nickels in front of buses."

We've always seen investing in Snap as a quick way to lose money. New stocks like Snap only benefit the big banks that play a huge role in taking these companies public. Meanwhile, retail investors are left with massive losses because they're not "Wall Street insiders."

Here's why institutional investors make IPOs a dangerous game for retail investors like you and me...