For investors who understand the risk and have patience, marijuana penny stocks offer some of the biggest potential profits today.

In comparison, the Dow Jones Industrial Average is only up 18.07%.

To help investors find these explosive profits, we're giving you a list of marijuana stocks to watch in June.

However, investing in marijuana penny stocks should be treated as speculative right now because cannabis is still illegal under federal law. 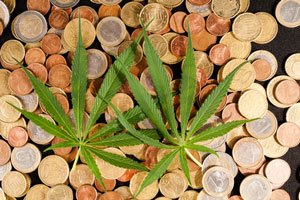 Also, penny stocks are known to have volatile price swings, and most pot stocks trade on over-the-counter markets that aren't regulated like the Nasdaq or NYSE. The stocks on our list are speculative, too - not official recommendations.

These seven companies have recently launched new products, opened stores, conducted research and development, or made important announcements that could lead to an increase in sales.

Here are the seven pot stocks on our radar right now:

Now, here's more on why we're watching each of these stocks in June...

On May 12, cannabis lab testing service Digipath Inc. (OTCMKTS: DIGP) announced operating results for the three months leading up to March 31, 2017. The testing laboratory firm recorded $497,049 in net sales, which is a year-over-year increase of 252%.

And the sales could continue to increase after July 1, 2017, when Nevada legalizes marijuana.

Because Digipath is based in Las Vegas, it's already operating in the next state to legalize marijuana. On top of that, DIGP is also seeking to enter the California marijuana market for lab testing.

Earth Science Tech Inc. (OTCMKTS: ETST) is on our watch list for June because of a new product line. On May 18, the biotechnology company announced it will launch an "Orange Blossom" cannabidiol (CBD) oil product.

CBD is an active cannabinoid found in marijuana that has been found to reduce anxiety.

The company said in a press release that the natural strawberry flavoring and orange blossom honey in the oil masks the CBD oil taste, which can be very bitter.

And this new product could give Earth Science a leg up on the competition in a billion-dollar market. According to the Hemp Business Journal, the CBD market will be worth $2.1 billion.

On May 23, medical marijuana researcher GB Sciences Inc. (OTCMKTS: GBLX) announced it was filing a patent application for chronic pain and heart therapies.

GB Science's pain solutions are free of THC, the psychoactive component of cannabis, which would limit potential abuse and make it more attractive as a medical solution.

In its May 23 press release, the company also said its novel heart disease formulations would compete in the $316 billion U.S. heart therapy market.

After receiving the license, the company opened the "Kaya Shack 3," a 2,400-square-foot retail space.

It sells marijuana, cannabis-infused products, and accessories for recreational and medical marijuana customers.

And the next marijuana stock on our watch list plans to revolutionize a new market through a unique delivery system...

How would a Newby go about investing in these?

Interesting share, a company that I have my radar on stock price is up 600% since May, check this article out http://bit.ly/2xQE03V