Calling the price of silver a roller coaster would be an understatement.

All you need is to look at a 60-day or 6-month price chart, and you'll see exactly what I mean.

In fact, even the past week can make seasoned silver investors nauseous. It's been a bumpy ride, and it's not over. On June 7, the price of silver was trading as high as $17.60. By last Tuesday, it had fallen all the way to $16.80.

Although silver has lost ground to gold in the last few days, a glance at the price chart shows we may already be at support, bolstering the case for a return to upside price action from here. 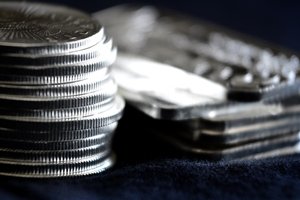 A quick comparison of gold and silver in the last five trading days shows their price behavior has been nearly identical, with silver of course amplifying the movements.

Let's examine silver's volatility over the past trading week, then look to what may lie ahead for the precious metal…

Silver began the week on a bearish note, following through on weakness from the previous trading sessions.

The metal opened on Monday at $17.09, and essentially headed only south for the remainder of the day. The U.S. Dollar Index (DXY) provided the headwind, rising from just above 97 to about 97.25 in short order. By the late afternoon close, silver had lost $0.16 per ounce, trading hands at $16.93.

Urgent: An incredibly rare gold anomaly is shaping up in the markets as we speak – one that has occurred ONLY twice in the past 20 years. And it's about to happen again. Details here…

Wednesday, as the U.S. Federal Reserve was preparing to make its rate hike announcement, silver action got a lot more interesting. It had mustered a bit more strength in overnight and early morning trading, opening at $16.91. Then it exploded higher, like gold, on disappointing retail sales, suggesting Q2 GDP may fall short. But the silver party was soon over, as Fed Chair Janet Yellen's hawkish comments spooked buyers into thinking the Fed would remain on a steady rate-hiking path. So silver then immediately tanked from $17.18 at 2:00 p.m. to $16.84 by 4:00 p.m., to close slightly better at $16.86. 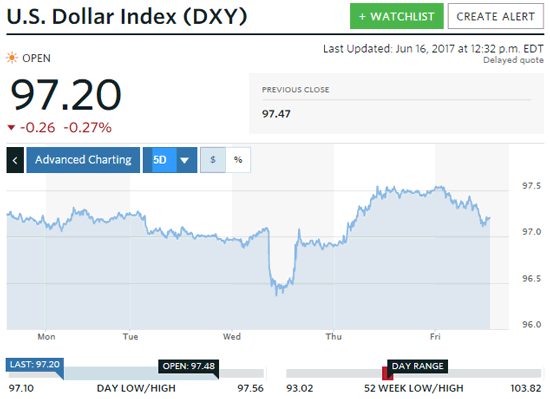 On Thursday, the dollar got its second wind, powering from 97 to 97.50 within hours. That was enough to squash silver, and it opened at $16.74. As the DXY stabilized, so did silver, which closed barely lower at $16.73.

Friday morning's profit taking in the dollar supported silver in early morning trading, but it only managed to open at $16.74. From there, even with a retreating DXY, silver weakened to $16.68 by midafternoon.

Now that we know how the price of silver has been trending this past week, here's where I see it going from here…

Here's What's Next for the Price of Silver in 2017

Dear Sir,
Charts are very nice and normally one can count on all these indications, however, we have to face criminal elements in the gold- and silvermarkets, such as JP Morgan in Jupiter, Fl., Goldman Sachs in London and New York as well as
various HFT traders with their bloody computers. Consequently charts are no good anymore. If decent market traders in the USA donot take actions against those dirty manipulators we are on the loosing side. . You never give an answer to my comments whether I am right or wrong in my understanding of the market. Rgrds HdB

If they are going to manipulate and beat down gold and silver go out and buy it. It's discounted, so take advantage….