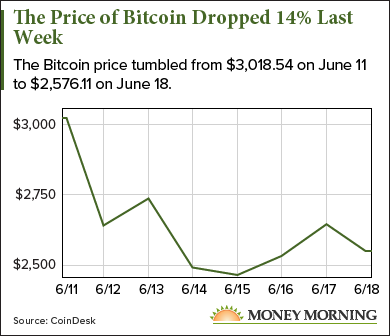 However, the Bitcoin price drop could be a perfect opportunity to buy more of the cryptocurrency.

As longtime Bitcoin owners know, the price of Bitcoin is incredibly volatile. In fact, the cryptocurrency is still up a whopping 176.38% in 2017, despite this week's pullback.

Here's why the Bitcoin price dropped double digits in the past week and where it could be heading from here...

Why the Price of Bitcoin Dropped 14%

When Bitcoin prices set a new high of $2,700 on May 25, the price fell as low as $2,352 on the same day. That was a 12.88% swing in just hours. Analysts at CoinDesk believe this was "profit taking," and that could have happened this past week as well.

When the currency reaches a new all-time high, some investors cash in some or all their profits. More selling means there is less demand, which can drive down the price of Bitcoin.

Goldman Sachs Group Inc. (NYSE: GS) also had a bearish impact on Bitcoin last week when the bank announced on June 12 it would start covering cryptocurrencies. The investment bank suggested prices would retrace to between $1,915 and $2,300.

However, what Money Morning readers need to remember is Bitcoin prices are still at record highs and could keep climbing. 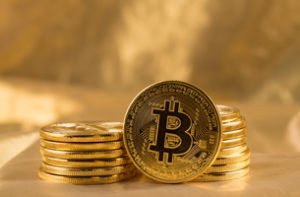 And these increases are modest compared to how high Bitcoin prices could climb...

It appears segwit2x is going to go through and ease fears about the hard. Lately there has been less volatility and a slow increase in price, not the monumental jumps we have seen in the past. India is going to leagalize, australia as well, japan is on board. I really can see the price taking off soon!

thanks for the article