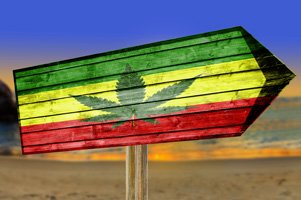 As the legal marijuana industry continues to expand, marijuana companies across the nation are looking for ways to not only profit, but to also support the communities they serve.

One way to do this is to create an entire town dedicated to cannabis.

This town serves two purposes: generate interest and revenue for the marijuana company, and provide an eco-friendly oasis for cannabis consumers - and the community.

Take a moment to learn about Nipton, Calif....

Giving the "Green Rush" a Boost

This investment represents a broader trend of integrating marijuana into the communities in which it is sold.

Not only did the company purchase the town, but it also acquired its Old West-style hotel, a handful of horses, an RV park, and a coffee shop, according to an Aug. 4 report from Business Insider.

The company plans to make Nipton the country's "first energy-independent, cannabis-friendly hospitality destination," according to a statement.

Visitors will find mineral baths, lodging, marijuana retail outlets, and "a first-of-its-kind eco-tourism experience for conscious cannabis consumers," according to a report from CNN.

The company also plans to provide cannabis-infused water from the town's flowing aquifer.

You see, these moves are not only eco-friendly, but also profitable.

And according to Business Insider, the company plans to expand.

"The buyers are also reaching out to edibles manufacturers and other pot-industry businesses, hoping they'll be interested in relocating to Nipton and bringing jobs with them," reported BI.

"We are excited to lead the charge for a true Green Rush," said David Gwyther, American Green's president and CEO. "The cannabis revolution that's going on here in the U.S. has the power to completely revitalize communities in the same way gold did during the 19th century."

And American Green is not the first cannabis company to realize the potential of investing in the communities they reside in...

Earlier this month, Summit Medical Marijuana, a small dispensary in Maine, launched a "day of service" in the town of Gardiner.

The cannabis company offered residents who collected trash around the area free marijuana to anyone over the legal age of 21.

The results were amazing.

Dozens of community members came together for the event, collecting heaps of trash and debris.

But for Dennis Meehan, the dispensary owner and organizer of the event, it was always about more than just gaining new customers. The day of service wasn't just about cleaning up the town, but also educating people about what he says is a life-changing substance.

"We're in talks with other states to get all dispensaries to do the same thing," said Dennis to us on July 26. "Our people need this."

"We need to get over the stigma and all of the misinformation," added Dennis. "I'm passionate about helping people, and [marijuana] could really help them."

Indeed, over 687 million people worldwide could benefit from medical marijuana treatments, according to a 2015 report from Medical Marijuana Inc.

But it's not just medical marijuana patients who could benefit from cannabis legalization...

The marijuana industry as a whole is set to receive a huge boost thanks to more states passing marijuana legislation.

By 2020, experts predict the marijuana industry will hit an estimated $35 billion.

And many analysts now believe the industry could eventually reach $150-200 billion each and every year. That's more than a 400% increase.

Here's how you can get in on the action...

How to Become a Pot Stock Millionaire

Michael,
This is my first time writing in and I don't usually do this sort of thing. But, this has made me quite curious. Currently, I'm a penny stock investor and looking this company up; its at a good price for me to invest a small stake to get some good return. So, my question is, "Is this a recommend or just some interesting news to wait and see on?"
I'm still working on a pot stock portfolio and haven't had great success yet. But I think that's more because some the positions I've come in a little late on and its to early to tell.
Anyway, I'd like to know you view on this companies potential and if its a possible recommendation. I haven't finished reading you briefing, "The Roadmap", yet, so if its in there, I'll have my answer. If it isn't there, would you add it? Thanks for your time.

So it has begun. Awesome. I told you the Cannibas Cup in Holland will influence the world and where it is heading in respect to the Marijuana Industry. I love to see all the creative ideas arising now or long held ideas from others allowing them to bring them to life now.

I have never really had a good vacation or a real one for that matter.
This I will try and visit. Including Baltimore to come visityou guys and just say hi. Need a passport first and New Mexico for reasons unknown but i have a great idea why i need to see it.

I am still waiting on the report on the Munchie era and those stocks to rise into some limelight. To expensive for me but if chocolate and chips and sweets are loved now. I cannot wait to see those rise from there dormant graves.

Anyways. I'm still broke but you guys still have my respect to the fullest.

Im very interested because of what i have read, most of my information is what ive read with monday morning! And i believe that its really ready to bust loose on the differant sectors of Marjiuana becoming available for the private legal consumption, medical use, and differant stocks in equipment to grow these high grades plants. And which fassits of the industusdries to invest in?

I've bought some stocks in different Marjiuana but some are growing but mine are not matching up with them Why have some exploded but mine are sitting still?

Why am i not getting a reply to my e-mails when I go to your website and ask Michael Robinson a question?