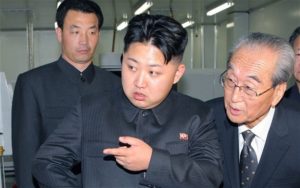 The Chinese have a few disparaging terms for the dictator, like "Jin San Pang," meaning "Kim Fatty III," or "Jin San Fei" ("Kim Abundant III"). In the United States, Sen. John McCain (R-AZ) referred to him as a "crazy fat kid" in a March 23 interview. Even President Donald Trump has labelled the 33-year-old dictator a "total nut job."

The dictator has earned these labels with near-constant displays of volatility -- from "eloquent," long-winded nuclear threats to murdering his own family members.

But being volatile may be very intentional on Kim's part; it may be what's required for him to keep an iron-hold rule over his regime...

Kim Jong Un's Volatility Was Nurtured by His Family

Kim was not born as the heir apparent to his father, Kim Jong Il's, regime. He is the former leader's third and youngest son.

Kim Jong Nam, his father's firstborn son, was originally Il's top choice to be his successor. But Nam earned a reputation for drinking and gambling and fell out of favor after he was caught trying to enter Japan to go to Tokyo Disneyland on a false passport in 2001. Nam was fatally poisoned in a Kuala Lumpur airport in February of this year. Many believe Un was behind the assassination.

Kim Jong Il's second son, Kim Jong Chol, was caught at an Eric Clapton concert in Singapore on Feb. 14, 2011. He had already been passed over in the line of succession for his younger brother, however, for being too "girlish" to take the helm.

Perhaps realizing early on that his eldest sons were not fit for the job, Kim Jong Il prepared Kim Jong Un from a young age to become the leader one day.

And part of that preparation focused on nurturing Kim Jong Un's volatile disposition and anger as a youth.

For example, Il caught his youngest son throwing board game pieces at a family member when he was eight after losing a game, The New York Times recounted on Aug. 10. Rather than disciplining the child for his outburst, his father began encouraging this behavior as it represented iron-fisted leadership skills.

On his eighth birthday, Kim Jong Un was given a general's uniform as a gift. From then on, generals paid their respects by bowing before him.

The North Korean state-run media also steeped Kim's youth in tall tales over the years, portraying him as an excellent marksman and a "genius among geniuses," reported The New York Times.

State media also plays a major role in the second cause of Kim Jong Un's volatility...

Kim Jong Un's Volatility Toward the U.S. Is Favored by His People

North Koreans bear ill will toward the United States for their country's utter decimation during the Korean War.

And, to the regime's point, the U.S. did devastate the country 63 years ago -- the bombing at that time was ruthless even by America's own leaders' standards.

"Over a period of three years or so, we killed off - what - 20% of the population," Air Force Gen. Curtis LeMay, head of the Strategic Air Command during the Korean War, told the Office of Air Force History in 1984.

And Dean Rusk, a supporter of the war and later secretary of state, told The Washington Post on March 24, 2015, that the United States bombed "everything that moved in North Korea, every brick standing on top of another."

Bombers also destroyed hydroelectric and irrigation dams in the later stages of the Korean War, flooding farmland and destroying crops.

To this day, state media still warns that the Americans will strike again.

And Kim Jong Un now has more power than ever to scapegoat the United States as the enemy.

But he must act volatile to do it...

Why Kim Jong Un Is More Volatile Than Ever

Having a verifiable atomic weapons cache gives Pyongyang the ability and the fortitude to threaten world powers with a nuclear arsenal of its very own - chiefly its oldest enemy, America.

Indeed, as Money Morning Executive Editor Bill Patalon points out, "Kim's threats give him a voice on the world stage."

For years, Patalon has been writing about the regime's nuclear advancements for his Private Briefing subscribers, making critical observations about North Korea's motives in order to help investors prepare for what's to come.

And right now, according to Patalon, Kim is "the veritable diva of the world stage."

And Pyongyang's advanced threats have once again homed in on the United States in recent months...

"I also think he's very worried about being destabilized by the West," Patalon says. "The nukes program is a kind of 'personal insurance policy' that makes it tougher to take him out."

Since officially taking over the role of regime leader in 2011, Kim's volatility has been more globally focused than ever before. The country once threatened to decimate its immediate neighbor with thousands of artillery weapons aimed at Seoul. Now, it's taken to cautioning the United States as well.

And there's an element to Kim Jong Un's volatility today that compounds fears over what the North Korean dictator might actually do...

One needs only to compare the young Kim's missile test timeline to that of his father's for proof of the regime leader's impulsivity...

And this is why the U.S. military has been working tirelessly to protect the American people.

Thus, the installation of the THAAD system in South Korea and the testing of the states-based GMD this past May.

There are ways in which investors can protect their financial futures while profiting from the build-up of "America's Shield," Patalon says.

In fact, on Monday (Aug. 21) the U.S. Air Force awarded Boeing Co. (NYSE: BA) a contract to continue work on the ground-based strategic deterrent program, which is planned to replace aging Minuteman missiles.

It's the first step in a three-pronged $500 billion refresh of the U.S. nuclear arsenal, which includes the construction of long-range bombers and new nuclear submarines.

Patalon saw Boeing's profit potential way back in 2011, when the company was trading for just $61.92.

Patalon's Private Briefing portfolio has several other lucrative picks as well, including one company that's gained 49% since he first recommended it and is expected to add another 41% over the next 12 months. Click here to reap the rewards yourself...