But how much the corporate tax rate will be cut is a much more complicated question.

The president has pushed for a corporate tax rate of 15%, which, on the surface, seems like a dramatic decrease from the current rate of 35%. This kind of cut would incentivize companies to return to the United States, which would create jobs and bolster the economy.

This move could do wonders for economic growth. Yet, some companies would end up paying more in taxes, even as their official tax rates were cut in half.

If that's not confusing to you, it should be.

Last week (Sep. 6), President Trump tweeted that the United States is the "highest taxed nation in the world." 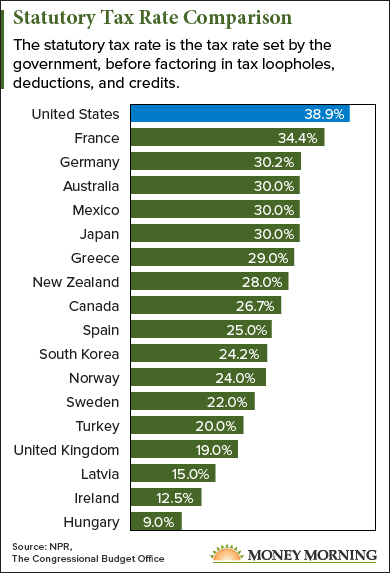 When you add the federal government's 35% tax rate to state and local taxes, American companies bear the greatest tax rate in the world, at 38.9%.

But in reality, few companies pay that rate.

That's because corporations exploit loopholes, deductions, and tax credits, resulting in a tax rate that is much lower than 38.9%. When you examine the actual tax rate that American companies pay (called the "effective tax rate"), we align much more closely with the rest of the world. 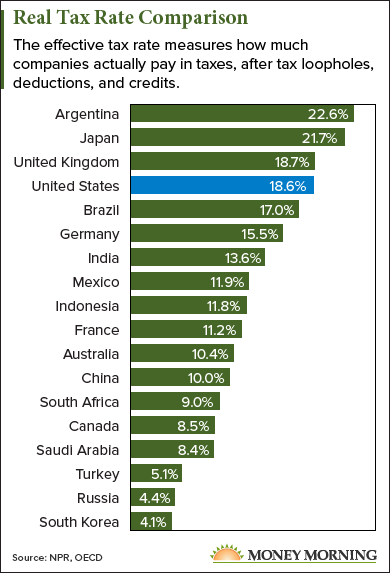 How Trump's Tax Plan Could Raise Taxes for Some Companies

Many companies don't pay corporate taxes at all.

According to the Government Accountability Office (GAO), nearly 20% of large American companies that reported profits in 2012 didn't pay any corporate income tax.

And according to a March 9 Institute on Taxation and Economic Policy (ITEP) report, one-hundred of the 258 corporations studied "paid zero or less in federal income taxes in at least one year from 2008 to 2015."

IRS-Proof Your Life: The more you earn, the more the IRS takes. But these 100% legal tax exemptions could save you millions over the long term. Learn more…

And if President Trump gets his way, these companies' tax-free days are over.

That's because paying for massive tax cuts means eliminating many of the legal tax loopholes that these companies take advantage of. So although Trump's 15% target is lower than the 18.6% effective tax rate, it's a lot higher than the 0% and 10% rates that so many companies have enjoyed in recent years.

And that's if Trump gets everything he wants.

Treasury Secretary Steven Mnuchin said on Tuesday (Sept. 12), "I don't know if we'll be able to achieve [15% corporate tax], given the budget issue," according to The Hill.

And White House Press Secretary Sarah Sanders said, "the president is prepared to push for as low of a rate as we can get," according to Reuters.

If we get Speaker Ryan's 22.5% tax rate instead, but still eliminate many of the tax deductions and credits that so many companies have used to lower their rates, we might even see an increase in the effective tax rate across the board.

An increase in the effective tax rate would not just be bad for American companies; it could be bad for the American people, as well.

Just look at Amazon.com Inc. (Nasdaq: AMZN). After Seattle passed a 2.25% income tax on city residents making more than $250,000 a year, Amazon announced that it would be opening a second company headquarters somewhere else.

Companies will go where their money is treated best, which is why we at Money Morning focus on CEOs, not on politicians.

Regardless of how Trump's tax plan eventually shakes out for American businesses, there's no reason you can't profit from the companies who know how to make money in any environment.

Take Amazon, for example. Keith says Amazon's decision "is akin to a second 'public offering,' which means you've got a chance to tap into a move being made that sets the company up for another decade or more of outrageous profits for investors."

If you're looking to profit from this e-commerce giant, there are multiple ways to do so. You could accumulate shares of the $990 stock one-by-one, as you can afford them. Or, for a cheaper option, you can buy a 26(f) fund like the T. Rowe Price Blue Chip Growth (TRCBX), of which Amazon is a primary holding.