The gold price rallied 2.4% higher last week, pushing the yellow metal back above the $1,300 level for the first time since Sept. 26.

That strong gain was likely a relief rally, which gold prices were due for.

From Sept. 12 to Oct. 5, gold declined 5.8% to a two-month low of $1,273. This decline was largely due to the surging U.S. Dollar Index (DXY), which measures the dollar against other prominent currencies like the euro and the Swiss franc. The DXY climbed from 91.88 to 93.96 over that same time period.

But the overbought dollar fell back in the wake of last week's Federal Reserve minutes release from the September FOMC meeting. Despite the CME FedWatch Tool showing a 91.7% probability of a December rate hike, the minutes showed Fed officials talking about a patient approach to raising interest rates, indicating an expected year-end rate hike may not happen after all. The DXY – which often rises on the possibility of rate hikes – fell from 93.80 to 93.06 last week in response.

The bottom line is the Fed remains perplexed over persistently low inflation, putting a December rate hike into doubt. That means a weaker dollar and stronger gold prices, since the two usually move inverse to one another.

I still think that a gold price of $1,300 will prove to be a challenging level. I expect gold to hover near that level, but even if it steadies above it, I don't think it'll move much higher for a few more weeks.

However, we still have more than two months before 2018, and I think that will be plenty of time for the price of gold to run much higher.

Before I show you just how bullish I am on gold this year, here's a closer look at last week's big 2.4% rally…

Here's a look at how the DXY trended last week… 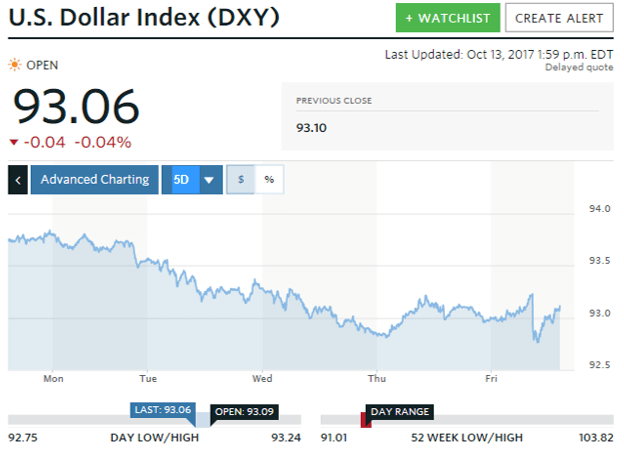 Wednesday saw gold open at $1,290 even, followed by a sell-off to $1,285 by 2 p.m., when the Fed minutes were released. The disagreement among Fed officials on how quickly and aggressively they should raise rates initially lowered both the dollar and gold. The DXY dropped from 93.29 to 93.02 on the day, while the gold price declined 0.4% to $1,289.

Despite last week's rebound, I remain skeptical that gold will keep rallying in the short term. It could likely head back lower through the rest of the fall season.

But that doesn't mean it won't head back higher through the winter, which is why I'm going to share with you my price targets for the end of 2017…

My Gold Price Prediction for the Rest of 2017