As expected, the gold price has struggled to regain the $1,300 level last week, but it won't stay below that price for long...

Although the U.S. dollar has been mostly sideways for the past month, it has regained some strength in the past week. The U.S. Dollar Index (DXY) - which tracks the dollar against the euro, Swiss franc, and other currencies - is up from 93.09 on Oct. 13 to 93.90 today (Monday, Oct. 23).

In my view, the price of gold will likely stagnate over the next few weeks. News around the tax cuts and the 91.7% chance of a December rate hike should support the dollar and stocks, attracting money away from the gold market.

On the other hand, I find it interesting that Goldman Sachs Group Inc. (NYSE: GS) recently came out in favor of gold. The bank said it believes precious metals are still a relevant component of investors' portfolios, even though they offer no yield.

My sense is that we're going to get a surprising upside move from gold prices and gold stocks before this year is out. That's why I'm going to show you my bullish gold price target for the end of the fourth quarter.

Here's a look at the dollar's performance last week... 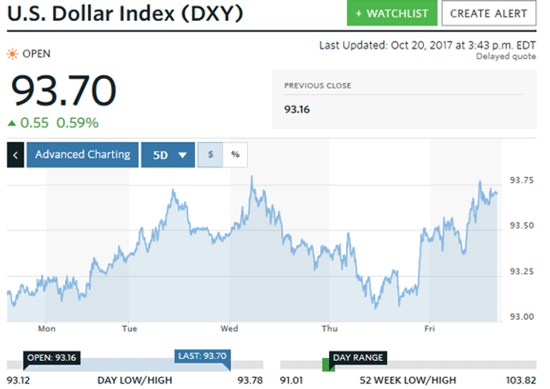 But the specter of tax cuts dominated market news on Friday. Stocks rallied as the Senate passed a tax reform blueprint aimed at cutting the corporate tax rate down to as low as 20%. This boosted the Dow Jones by 0.7% and lifted the DXY from 93.27 to 93.66.

Of course, that again spurred gold selling, dragging the metal down to $1,281 by the end of the day. With that, the gold price posted a 0.7% loss for the day and 1.8% decline for the week.

As I mentioned, I think the gold price could keep heading lower over the next few weeks. The dollar's rally doesn't seem to be over, which could likely cap any gold gains in the short term.

But my longer-term gold price forecast over the next two months is much more bullish. In fact, I expect gold to reach this bold target before the end of 2017...

My Gold Price Prediction Shows a Double-Digit Gain Before 2018

I´m bullish on gold for the last couple of years ,however, this bullishness is constantly torpedoed by criminal elements such as JP Morgan´s secret office in Jupiter, Florida, HFT trading, high velocity trading and even the now bullish Goldman Sachs is part of these dirty manipulators. Business has nothing to do with honest "offer and demand" but only with idiots behind a computer. Sorry